But the story of how a company got the internet to Everest is just as interesting. In this cold region of the world, communication can mean life. More than 1,600 climbers have had internet access while on Everest. In the region, Everest Link provides more than 200 Wi-Fi hot spots in more than 40 villages. The company connects 34,000 locals and more than 40,000 tourists each year.

Tsering G. Sherpa, CEO of Everest Link, said in a blog post that his only means of communicating in Nepal before the year 2000 was the written letter, sometimes delivered by helicopter. That year, his mother was diagnosed with breast cancer. He had to fly her to the nearest city and then to India for treatment. His sisters lived in Nepal, and they had to shut down their business to join their mother in India. While caring for their mother, they lost a year’s worth of business because of inadequate communication. Sherpa said their mother has since passed away.

He took this difficult experience as a call to action and started a network in Nepal with 128 kilobits per second of bandwidth. The goal was to connect remote villages that lacked communication. It was going well, but then the country went through a period of political unrest.

“We had to abstain from providing service, going on hiatus for eight years due to threats from extremists,” Sherpa wrote. 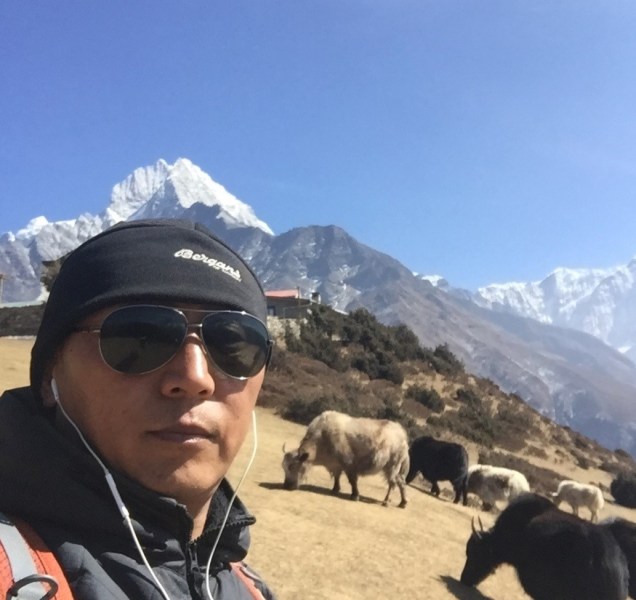 Above: Tsering G. Sherpa, CEO of Everest Link, in front of his office near Mount Everest

Sherpa brought Everest Link back in 2014 with a fresh, broader mission: to set standards for ecological, economical, and reliable modes of direct communication in the Himalayas, where you sometimes have to walk three days to get a pack of cigarettes. Because the air is so thin at high altitude, it can take six hours to travel a kilometer.

“It took us a couple of attempts to get established, beginning with low-cost Wi-Fi equipment, and then progressing from 802.11b to g,” he said.

Then the company turned to Cambium Networks‘ cnPilot equipment. Cambium is based in Rolling Meadows, Il., and it has created “frictionless Wi-Fi,” which can support many different access points through a single wireless network.

All the solar panels and devices had to be carried by either people or pack animals to get to a particular site. That meant that the more compact the device was, the less power it required.

“At the moment, we’re connected to the Everest base camp. There, at 5,320 meters altitude, we have a solar-powered cnPilot E500 outdoor Wi-Fi hotspot,” Sherpa said.

Everest Link is also starting a distance-learning program in some schools, since few teachers are available in the remote Himalayas. High-speed connectivity links those schools, as well as every hotel in the region.

“To reconnect the stories of my family and my company — once my sisters left Nepal to go to the city during our mother’s illness, they never returned,” Sherpa said. “Instead, they migrated to the United States and are raising their families there. Yet our connectivity has kept us close as a family, which inspired me to extend that to our entire community in Nepal.”

You can’t get a connection on top of Everest yet. But maybe someday.