Ubisoft’s Tom Clancy’s The Division is one of the biggest video games coming out this spring. And Tobii hopes to make it stand out even more with a new eye-tracking technology that lets the player target enemies with his or her eyes. It takes aim assist to a whole new level.

Tobii has created a next-generation user input system for controlling games using your eyes. Wherever you look on the screen, you can make things happen just by gazing at the right place. Eye-tracking cameras are built into devices — such as the Tobii EyeX peripheral, the SteelSeries Sentry, or the MSI GT72 S gamer laptop — that can track the movements of your eyes. The eye-tracking system is nothing less than an attempt to make the mouse and keyboard obsolete, and it could be a very useful user interface too for new devices such as augmented reality glasses and virtual reality headsets.

Though it seems like science fiction, the cameras are pretty good at tracking your eye movements. I tried it out in a preview with the PC version of Ubisoft’s Tom Clancy’s The Division, which debuts on the PC and the consoles on March 8. It worked flawlessly, but the advantages that it creates for the player are harder to measure because they’re pretty subtle. Playing with your eyes is unquestionably faster than moving a cursor across the screen using a game controller in your hands. It certainly makes the experience more immersive and fun. 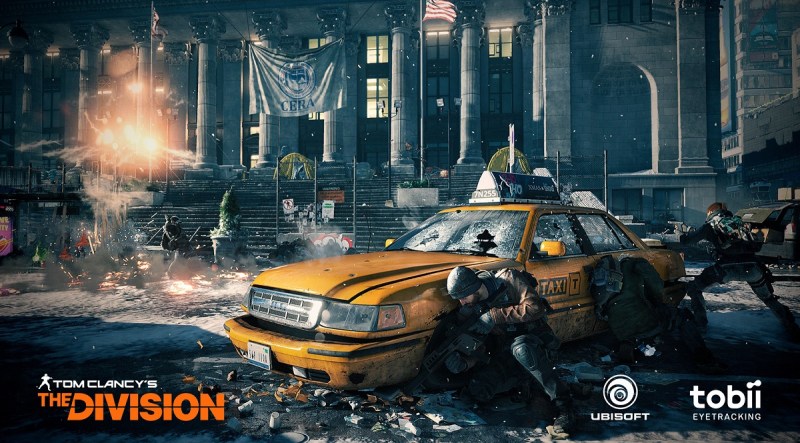 Above: Tobii has built eye tracking into the controls of the PC version of Tom Clancy’s The Division from Ubisoft.

The Division is a cover-based third-person shooter game set in a post-apocalypse New York City. Gangs of thugs roam the streets, and you have to take them out. But it’s not particularly easy to maneuver through all of the debris, target the enemies, shoot them, and move on to the next one using a mouse or a game controller. Stockholm-based Tobii Tech set out to change that by working closely with Paris-based Ubisoft to integrate eye tracking into the control system. This is the first time that many of these features are appearing in a major game title, but Tobii Tech president Oscar Werner said in an interview with GamesBeat that dozens of games are in the works using the eye-tracking technology.

“It gives you a more immersive feeling,” Werner said.

Stuart White, senior producer at Red Storm Entertainment, a Ubisoft studio, said in an interview that The Division will feature “enemy tagging,” where you can simply look at an opponent to highlight the target for your teammates to shoot at. That is normally very hard to do in multiplayer games that lack voice chat such as The Division. 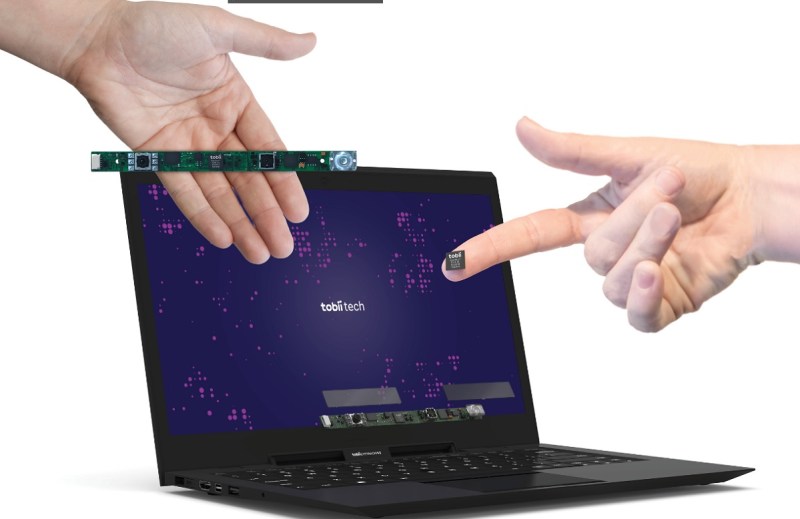 Above: Tobii’s eye-tracking its built into the camera of a new MSI gaming laptop.

“In the grand scheme of things, it wasn’t that hard to integrate,” White said. “Technology like this has come along to force us to change. We haven’t seen innovations since the creation of the keyboard and mouse.”

The PC gaming gadgets that use the Tobii technology are just coming out now. The MSI GT72 S has a camera built into it with red illuminators that enable the tracking. (Players will get a copy of The Division if they buy the MSI laptop).

“We’ve got it in the world’s first gaze-enabled computer,” Werner said.

The experience was quite good. I had to calibrate the system so that it could spot my eyes and how they moved. I did so by staring at one part of the screen wherever a dot appeared. After I finished that in less than a minute, the system never lost sight of my eyes.

The main benefit is what Tobii calls “aim @ gaze,” which moves the target reticle to the spot on the screen where your eyes are gazing. You pull the left trigger on a game controller, and the reticle moves instantly. But it doesn’t precisely target the object you are looking at. Rather, it is just a little bit off. Otherwise, it would be too easy to aim at enemies and shoot them, Werner said. The physical equivalent of eye tracking, then, is more like when you raise a gun to aim at the general direction of an enemy. You can generally target the person, but you are not precisely aimed until you stare down the gunsight. You finish the targeting by moving the mouse or controller joystick a slight distance to get the reticle on the target. Then boom. You shoot. 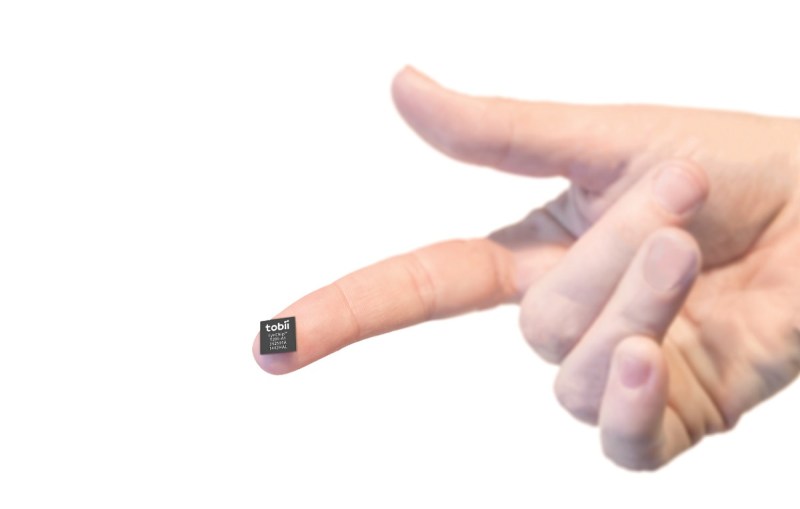 Above: Tobii’s eye-tracking tech is built into a chip for a camera in a laptop.

I experimented with this system for a while, and it turned out to be intuitively easy. I was able to target enemies faster than I was while playing the beta of The Division with a game controller on a PlayStation 4. Even with the added time of making the fine adjustments with the thumb stick, I could shoot better. But I also don’t think it gives you an unfair advantage, thanks to the fact that the technology is slightly disabled in that it requires you to finish the aiming with the thumb stick.

You can also use “grenade @ gaze,” where you toss a grenade wherever you are looking. And you can use “cover @gaze,” where you look for a cover point and then press the “A” button on the controller. That sends you scrambling to a new part of the terrain where you can hide. That’s a necessary part of gameplay in The Division, as anyone caught out in the open can be quickly killed. When you look at a new object that can give you cover, it becomes a point where you can move really quickly simply by holding down the “A” button. 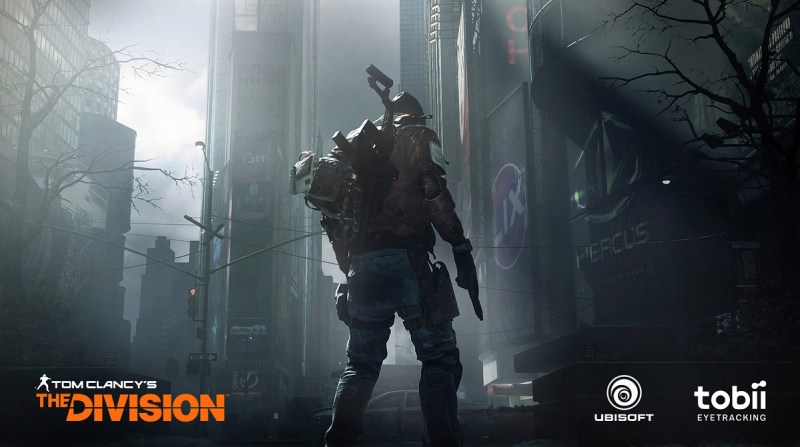 Above: Ubisoft’s Tom Clancy’s The Division launches on March 8.

Tobii also created an extended view in the screen, allowing for you to look at the sides of the screen in order to get an “infinite screen” experience. That means you look at the left, and the scene camera will automatically pan to the left to follow where your eyes are looking.

And when you look at the map of the battlefield, you can look at an item and highlight it and select it easily. That enhances how easy the map is to use.

Tobii also created a cleaner user interface. You can look at the screen and see the full view of everything in the scene. But if you look in the corners of the screen, the elements of the user interface will appear. You’ll see items like the mini-map appear when you look to the upper left corner, or you’ll see the ammunition and health levels appear if you look in another corner. That means you’ll have fewer distractions on your screen.

Tobii and Ubisoft have also integrated the eye tracking into Assassin’s Creed Syndicate on the PC as well. I tried that out, and it worked well too. You can look at places on the horizon and see the different spots where you can launch a grappling hook. It speeds up the process of navigating through the 3D landscape of London.

Tobii’s parent company, Tobii Technology, has been developing the eye-tracking technology for years, and it has targeted a lot of that technology at disabled users. But the company hopes that eye tracking will become ubiquitous through general PC user interface, virtual reality, and augmented reality applications, Werner said.