As Pokémon Go takes over the world, players are finding themselves in a strange new place called “outside.” This has led to a few run-ins with concerned citizens who don’t understand why all these humans are standing on the sidewalk outside their homes and businesses — and sometimes are sneaking onto their property.

But no matter how hard anyone shakes their fist at you, you have every right to play Pokémon Go anywhere you want in public in the United States, according to Avvo chief legal officer Josh King. Avvo helps connect people with local lawyers, and King is responsible for the company’s entire legal-affairs business. He previously worked in legal (and some non-legal) roles at communications companies like AT&T, Clearwire, and Cellular One. He answered a number of questions we have about Pokémon Go. He pointed out that even if you’re in an area with loitering rules, you are generally protected by the First Amendment’s right to free assembly.

We brought in King to help us make sense of some of the common complaints we’ve seen. He said that most people won’t have luck if they try suing Niantic if something goes wrong. Although, with Pokémon Go dominating the $36.9 billion mobile gaming sector with its GPS-powered location gameplay, someone is probably going to try taking the developer to court.

The gaming industry enjoys the protection of the First Amendment when it comes to free expression, but Pokémon Go is one of the first games to use your legal right of assembly. And I’m sure James Madison was thinking about your god-given pursuit of ’em all when he sat down to right the Bill of Rights.

More broadly speaking, Niantic has First Amendment protection when it turns private property into an in-game location. The studio, for example, can turn private property like a church into a PokéStop, and it has every right to do that. That church wouldn’t really have a case against Niantic, according to King.

“They don’t have an option to file suit against Niantic. That’s not really in the cards,” he said. “If you want to look at the pure legal issue there, Niantic or Pokémon can associate any piece of property with, let’s call it a virtual signal. They’re well within their First Amendment rights to do that.”

Now, that doesn’t mean you, as a private-property owner, have to let every Pokémon trainer on Earth onto your front lawn.

“There’s obviously traditional trespass laws,” said King. “If by virtue of having the marker on your property, people start trespassing, physically walking on your property, then you obviously have all the same trespass remedies you would have in any normal situation.”

You can call the police to have someone removed, or you could take … more drastic action.

“Trespass laws are going to vary from state to state,” King added. “You’ve probably seen from the news that they can be kind of extreme in places, particularly in the South, that have things like the Castle Doctrine, where you can basically shoot trespassers on sight.”

So while you have a right to play, you should be careful out there.

What will happen when Pokémon Go changes the world?

But your right to assemble in a public place or your right to shoot someone is only a couple of the questions that Pokémon Go is bringing up about the new ways humans will interact with the world around them due to technology. The game uses your GPS and Google Maps to place virtual monsters in the world. It is so popular that approximately 300 people gather in New York City’s Central Park every night in search of the digital beasts. That is forcing society to quickly confront questions about how we will control these kinds of apps — especially as augmented reality devices like Microsoft’s HoloLens (which create digital images that interact with the real world) start rolling out to a critical mass of consumers.

“One of the great things about America is that despite the amount of regulation we have in this country, we’re still relatively unregulated,” said King. “We’re still believers in innovation, rather than the precautionary principle. We don’t try to overregulate how people spend their day, where they can go, what they can say, how they can express themselves. And so that’s one of the things you’ll probably start to hear, people calling for various forms of regulation of what Pokémon Go does.”

Regulation is going to make a lot of sense to people in these early days as rare horror stories pop up about players hurting themselves or others. Someone has already crashed into a cop car while driving and playing the game. Others walked off a cliff. But these events make the news specifically because they are abnormal, and most players are going to survive or even thrive.

“We can dream up all of these potential legal problems that are going to happen,” said King. “There are absolutely people who are going to get injured or even killed because they’re out and they’re distracted and they hurt themselves. But we’re also enabling all of this additional interaction. We’re getting people outside. They’re meeting people they might not have met otherwise. Our first amendment protects the right to express ourselves that way, and it also protects our right to get together and get out and interact. Pokémon Go is simply using that freedom to enable something that a lot of people are going to find very meaningful.”

Who can you sue?

As society adapts to this new kind of game, individuals are still going to find themselves in situations where they end up injured due to an accident or criminal violence. But can those people sue Niantic, Nintendo, or The Pokémon Company?

“Well, as I like to say, any idiot can file a lawsuit,” said King. “We know that well. We’ve been sued by a lot of lawyers over the years. Those things never go anywhere. You’d have the same thing happen here.”

And King also notes that he’s seen this kind of moral panic around new technology before. 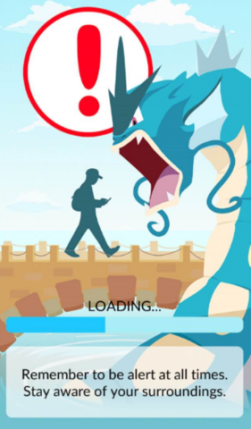 Above: Pokémon Go’s loading screen is a warning that should keep Niantic and the other companies out of any legal liability.

“I’m old enough to remember similar sorts of concerns when the Sony Walkman [portable audio cassette player] first came out in the early ’80s,” he said. “People were concerned about everyone walking around with headphones on and getting distracted and run over by buses and stuff, and whether Sony would have any liability there. But ultimately we all have an obligation to keep ourselves safe.”

A court would expect Niantic to warn people about the dangers of not paying attention, and the developer has already built that into the game. Pokémon Go’s loading screen is a warning screen.

That screen, however, doesn’t mean everyone will avoid liability.

Pokémon Go is leading to increased foot traffic around real-world locations that feature key points called PokéStops and Gyms. Businesses are taking advantage of this to increase their sales by putting down special items that attract players. But if a business owner is getting more customers, they may potentially find themselves in a situation where someone gets hurt playing the game on their property. That could lead to a lawsuit.

“It’s certainly the case that if you have an obligation as a property owner, you need to keep that all safe for people who are going to be using that property,” said King. “And yeah, if there’s more people interacting with that space because of Pokémon Go, then you probably are — to the extent that you have an unsafe condition, you’re probably increasing the risk that someone’s going to get hurt on that unsafe condition.”

In that circumstance, and most others, Niantic would likely not have any liability. That’s also true of people are walking onto your personal property

Now, this may surprise you, but you have more options in life than suing people or shooting them. If someone is gathering on or near your property, you could call the cops, and the officers may ask the players to leave.

Or you could ask them to leave. You don’t have to take extreme actions before finding out if talking could get you want you want. At the same time, people playing the game should probably use their common sense and empathy before barging into other people’s lives.

King notes that the court of public opinion will determine Pokémon Go’s future more so than any actual courthouse.

“One of the interesting things is going to be the norms that develop around it,” he said. “It’s one thing to have this interaction where you see all these people in the park and they’re all playing this game. People play Frisbee in the park. They walk the dogs and whatever. That’s all fine. But we’re already seeing this with, what happens when people want to play Pokémon Go as they’re going through the Holocaust museum? Or even in an art museum, or in a cemetery. You can think of a lot of scenarios where this is a developing norm. It’s something we face a lot with technology.”

Like the Walkman, it’s something we’ve gone through before. King remembers thinking cellphones were weird when they first gained popularity.

“If you saw something walking around on their phone, you thought, geez, what an asshole,” he said. “And now everyone is doing it everywhere and it’s become socially acceptable. But I think this is something that you’ll see, where these entities can’t really file a lawsuit — if you’re the Holocaust museum or Disneyland — against Nintendo or Niantic to say you can’t have your service be available on our property.”

He says that you can set up rules for your customers, which is something a lot of establishments did when Google released its wearable Glass computer. Signs in San Francisco bars started demanding “no Glass allowed,” and that could happen here.

“You’ll probably see a wide range of businesses, including probably restaurants and bars, that will ban playing Pokémon Go,” he said. “And they’ll enforce that by — if someone is doing this and they feel like they’re being disruptive, they’ll kick them out of their establishment.”

Keep that in mind next time you see a sign that says you need a shirt, shoes, and a distinct lack of Pikachus to enter this watering hole.