Imagine a VR simulation in which you can speak in front of an audience of thousands of people shuffling in their seats. All of those faces in front of you may not be real, but the 360-film footage and audio will trick your brain into firing up all of those familiar nerves, invoking what the VR industry is calling “presence.”

The idea would to create a virtual experience that mimics the real world setting or event to such a degree that it simultaneously triggers psychological conditions like anxiety, self-consciousness, and spatial awareness. The user can not only practice their speech with the aid of uploaded presentation slides and notes, but also their orientation on the stage, their posture and gestures, and how they interact with the audience.

This would let the user rehearse and prepare for a speaking engagement of any kind, be it a job interview or a best man’s wedding speech, in a way that dramatically cuts the learning curve and enhances performance.

As of the first half of this year ideas like this have become a reality and represent one of the key initial markets investors should flock to in the VR space as the industry moves from the hype cycle to the facing-reality stage, as Tim Merel described earlier this month.

The first simulation up to bat is one created by a graduate team at Carnegie Mellon University’s Entertainment Technology Center (ETC) in Pennsylvania. The ETC’s two-year program admits about 75 to 80 students per year, all of whom participate for one semester in exploring a particular task or research problem that is then turned into an applied research project. They are either sponsored by companies like Electronic Arts, developed according to the ETC’s R&D agenda, or entirely student-pitched.

The VR Rehearsal project was student-pitched and was inspired by another ETC project, Kotodama Fruit Juice, which for its part explores the idea of using advanced speech recognition and narrative trickery to create “stories that listen” in VR.

“While watching this project’s trailer, I came up with questions like, how about changing the perspective of the user from the audience to the actual speaker?” Byunghwan Lee, producer at the VR Rehearsal student team, told me. “I decided to design a project that is focused on allowing a speaker to get feedback and have interaction while he practices in the immersive experience. 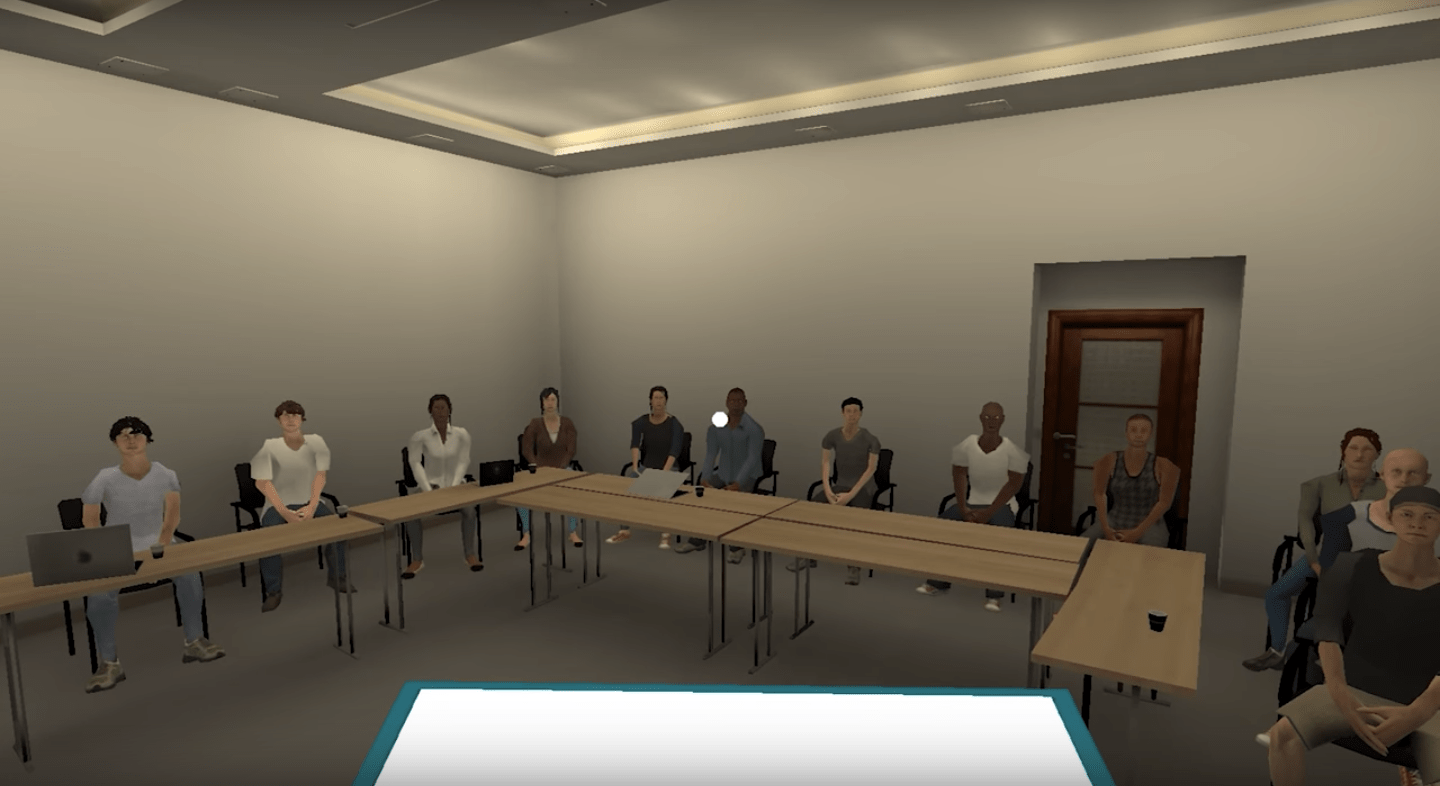 Lee and his team developed the mobile app between January and May, releasing it on April 30 on Google Cardboard. It lets users upload their slides, choose from a selection of venues, and set a presentation timer. The audience consists of pixelated characters that react according to a gaze heat map that is activated based on the user’s eye contact. There is also a voice playback feature so that speakers can review each session and focus on aspects of their speech like intonation, pacing, and timing.

The simulation hasn’t progressed since then because the semester came to an end, but luckily across the Atlantic is another simulation that was developed in parallel.

At about the same time as Lee and four of his classmates were developing VR Rehearsal, Dominic Barnard and Artur Grzybowski came together to launch a startup on the same concept in the UK. They met while working at the Virtual Innovation Centre (VLC) at Jaguar Land Rover and came up with the idea after presenting last year at the Augmented World Expo in San Jose, California, on the topic of applying augmented reality to the automotive industry.

“We realized that there wasn’t a decent way to practice for this event, with current methods including talking to a mirror or paying for expensive public speaking classes,” Barnard told me. “After doing some market research, we realized that up to 74 percent of people suffer from speech anxiety and that we could create an exciting product to help millions of people.”

VirtualSpeech is what you would expect VR Rehearsal to evolve into if it had additional runway and resources beyond its single ETC semester. Its various event venues include rich 360-film footage and audio that even includes immersive sound features like interjecting random coughs coming from the audience and clapping at the end of a timed session. They are also currently working on releasing their own version of a gaze heat map in order to offer the same audience interactivity as the ETC simulation. 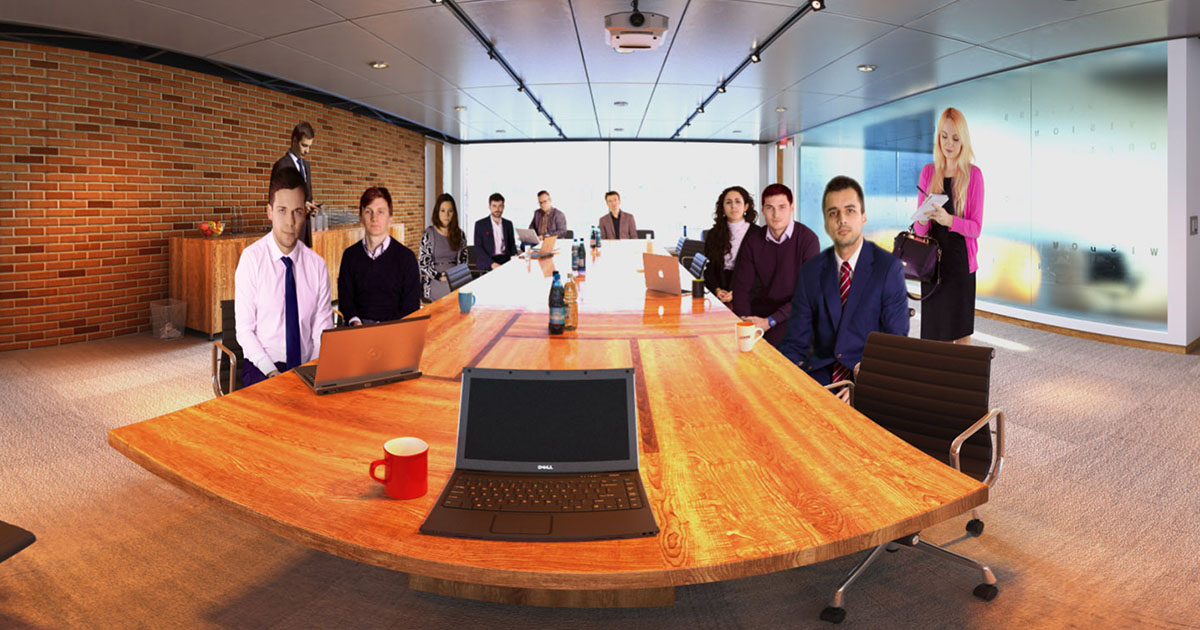 Above: 360 video boardroom by VirtualSpeech

“The simulation is highly rendered in 3D graphics, with suitable textures and materials applied to make the surfaces look realistic. The audience is then green screened into the environment so that they look realistic and have natural movements,” Bernard adds.

The two founders first released an early proof of concept on Android in February, followed by a production version, Public Speaking for Cardboard, on Google Play a couple of weeks later. By mid-March they published the app on the Apple store after fixing several bugs and improving the realism of the audience. In June they launched on the Gear VR store with Public Speaking VR and hit over 35,000 downloads within the first month. 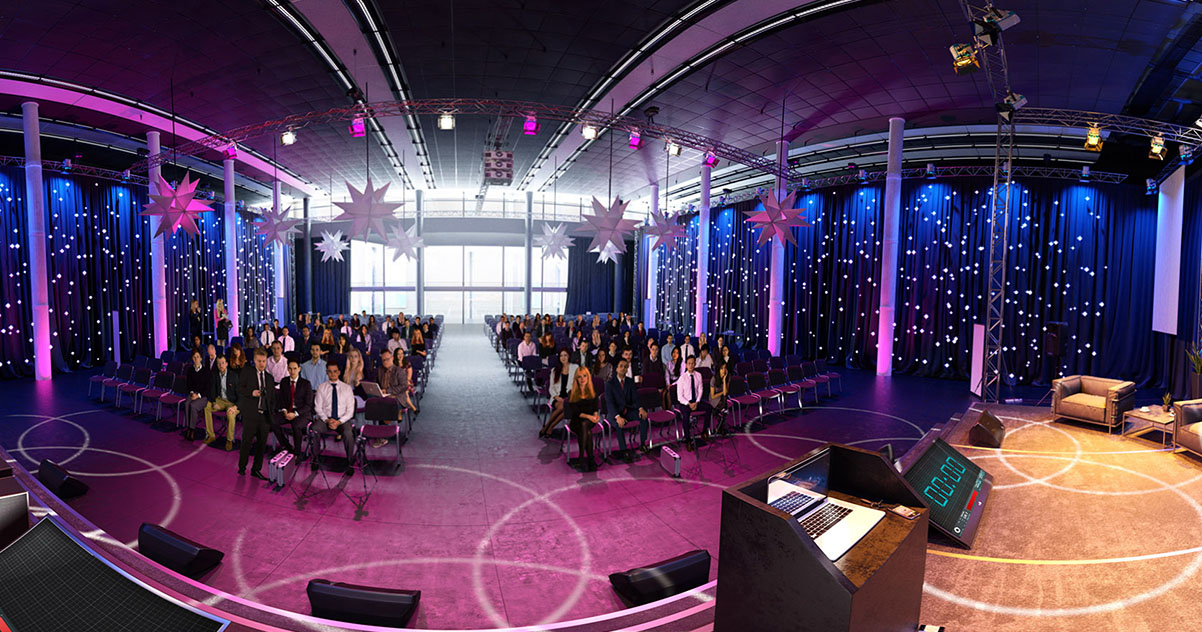 They received a strong wave of interest from universities and training companies, which has solidified their resolve to continue along the path of education by expanding into complementary tools like creating a job interview simulation in the app that will ask the user difficult questions that relate to the specific job or company they had chosen.

“This type of immersive technology really helps students learn and practice. For years, students have used digital recording to help practice,” Matt Abrahams, author of Speaking Up without Freaking Out, a lecturer at Stanford University’s Graduate School of Business and cofounder of Bold Echo, told me. “This VR app is light-years better for experiential learning.”

Their vision for the future of their product doesn’t stop there. In response to being contacted by a few social therapists, the team is also developing a social anxiety course into the app in order to contribute to the area of Cognitive Behavioral Therapy (CBT) and so help contribute to the cause of making people more comfortable and confident in social situations and settings.