YouNoodle, a new San Francisco company, says it has developed a “startup predictor,” or a set of analysis tools to help investors place bets on the university entrepreneurs that are the most likely to succeed.

The company, founded by two 20-something entrepreneurs who met at Oxford, will offer its basic technology beginning March 3. Its core analysis stems from work YouNoodle has done over the past 11 months, working with universities to help them organize business plan competitions. The “predictor” analysis will consist of historical data about qualities of a start-up team’s founders, the type of network these founders have, their participation in competitions and their progress over time. By comparing founding teams across hundreds of university, college and vocational campuses, YouNoodle says it can make good estimates for success entrepreneurial teams in their earliest stages. A more advanced algorithm will be released some time later for professional investors, for a subscription fee.

I talked with two of the founders this evening, Bob Goodson, 27 (left) who is chief executive, and Krill Makharinsky, 22 (right), both recruited by PayPal founder and Slide chief executive Max Levchin to come to the U.S. Levchin and former PayPal chief executive Peter Thiel have both invested in YouNoodle, as has Thiel’s Founder Fund. Goodson wouldn’t disclose the amount; he said other investors will also be announced.

I challenged them on their audacious goal of predicting success of start-ups, telling them it was impossible to say which ones become the next hundred billion dollar Google. I’d read Goodson’s quote the NYT earlier in the day where he said: “Give us some information, and we’ll give you some idea of what the company will be worth in five years.” That’s pretty absurd, and investor Paul Kedrosky’s quote to the Times was spot on: “If their tool did such a good job, they’d raise a fund themselves and beat the tar out of us.”

But when I talked with them directly, the two founders were somewhat chagrined by the New York Times article, saying it was sensationalist, especially the Times’ headline about being able to predict a company’s fate. Whether they were backtracking or not, I don’t know, but what they told me seemed to make a lot more sense than what I read in the Times. “That’s not what we’re doing,” Goodson told me. “What we’re interested in is the very earliest stage. That’s the biggest pain, when it’s just getting off the ground,” he said. He explained that they’re trying to do with more mathematical rigor what an investor tries anyway through time-intensive diligence, that is, check into a team’s heritage, its network, success with early prototypes, etc., and then make conclusions about a team by comparing it with other founding teams. Goodson conceded: “Of course, it would be absurd to say we’d predict all the factors involved that go into a startup being successful.”

In other words, this makes a lot of sense, and I can see it being quite useful if done right. There is so much work investors have to do, and so much inefficiency before the first round of capital, that anything to make it smoother would be good for both the startup and the investor. However, after the first round, market factors, and other dynamics take over, it’s impossible to predict how a company will do.

Today (Monday), the company has opened up sections of its site, including profiles of companies, entrepreneurs, as well as several of the groups that are hosting business plan competitions on the site, such as Stanford’s BASES, and the Stanford Social e-challenge Competition, as well as programs at Berkeley, Harvard, Oxford, Cambridge and Imperial College London. You can subscribe to an RSS feed to stay updated on events and news about start-ups of your choice, and you can upload your resume for others to see.

The company is a team of five. 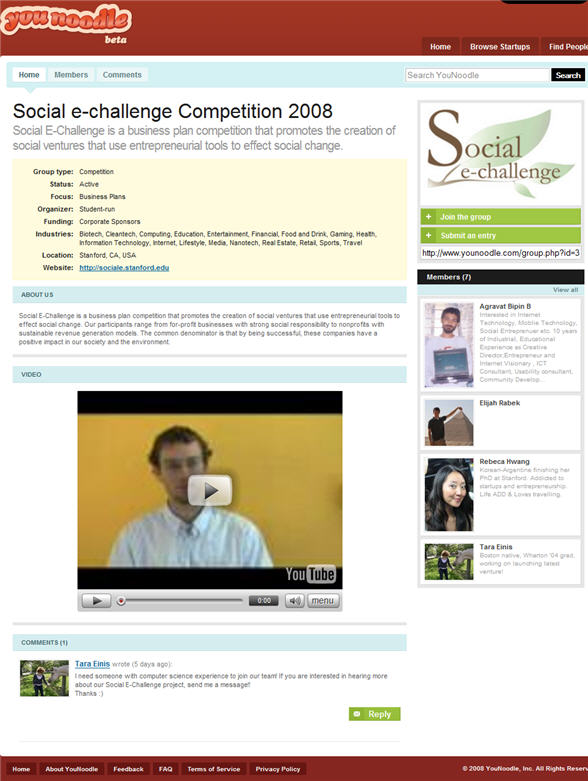