YouNoodle, the company that made a splash last year by claiming to predict the future value of startups, is continuing its efforts to turn startup evaluation into a science. Now it’s adding a YouNoodle Score that tracks news stories to determine a startup’s “impact and importance based on traction, acitvity, and buzz.” And it’s making those scores available to the public, not just entrepreneurs who joined YouNoodle’s online community.

Co-founder and chief executive Bob Goodson says YouNoodle has been working to develop the scores behind-the-scenes for the past year. There are around 7,000 companies that have already created profiles on YouNoodle, but the San Francisco team just published another 20,000 — and all of them have YouNoodle scores. (Though it looks like VentureBeat wasn’t among the profiles.)

This definitely complements YouNoodle’s Startup Predictor, which looks at a company’s “DNA” when it’s just starting out, while the YouNoodle Score tracks the company’s progress over time. (You can see a chart of Heyzap’s startup score over time in the profile screenshot below.) And I expect the score will meet some of the same skepticism as the predictor. 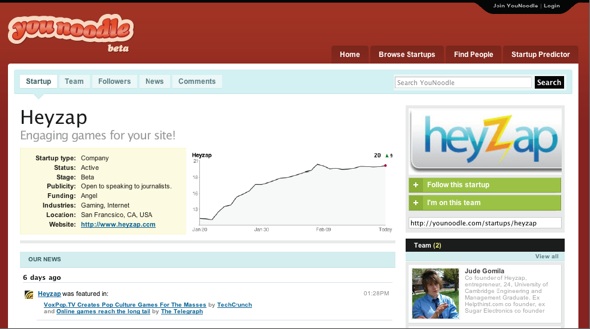 As before, however, Goodson emphasizes that there’s some real science involved here, and he sounds plausible — at least to someone like me, who doesn’t necessarily buy the concept but lacks the technical background to judge it. At least there are real scientists involved: The YouNoodle Score was developed by Dr. Sean Gourley, the company’s director of data tools, who was recently named a TED fellow and is already well-known for his involvement in developing a “law of war” to predict when attacks will occur in modern conflicts. The scores, which range from 0 to 100, will be based on more than 150,000 startup news stories aggregated daily as well as data from CrunchBase and AngelSoft.

You can check out the YouNoodle site to see all the scores, and we plan to have a Startup Tracker widget on the VentureBeat site soon. In the meantime, here’s a sampling of some top companies’ scores:

So if all of this information is available for free, how does YouNoodle plan to make money? Goodson says there’s an opportunity to sell more advanced tools to government agencies and limited partners. For the government, these tools help them understand where to put their money in order to stimulate the economy, while LPs learn where to make smart investments. UK Trade and Investment is already using a customized global startup tracker, Goodson says.

“We want to continue providing free tools to the startup community, to continue adding value,” he says. “Then we’re building more advanced global tools on top of that for a handful of governments and LPs.”