YouNoodle, an online community and website for entrepreneurs, just unveiled a feature that’s certain to attract (and anger?) plenty of curious users — a “startup predictor” that scores early-stage companies’ promise and feasibility, and even estimates what their value will be in three years.

The San Francisco startup already drew a fair amount of skepticism when it announced its intentions back in February. But VentureBeat Editor Matt Marshall thought the basic idea isn’t totally crazy, and after talking to chief executive Bob Goodson, I agree.

Here’s how the predictor works: You fill out a lengthy questionaire about a startup, which gathers information about four factors — the founding team, financial information, advisors and the concept. It crunches the data, then gives you a score based on a 1,000-point scale and a valuation. The goal is to provide investors with a quantitative, “scientific” guide to whether a startup will be a good investment.

Is there really a scientific way to measure something like team dynamics and potential? There is, Goodson says — the startup predictor draws heavily on social network theory, and it even has a Stanford Ph.D. student named Rebecca Hwang on its team who does research on that very subject.

Naturally, I had to get a valuation for VentureBeat. After plowing through page after page of questions, what really struck me is the emphasis that seems to be placed on the founding team, while questions about concept and finances are relatively sparse. For example, I didn’t have to enter any information at all about VentureBeat’s revenue or traffic, which is a bit odd. The reasoning is that YouNoodle (for now, at least) just provides a “snapshot” of a startup right when it’s getting out the gate, Goodson says. To use a metaphor from the press release, YouNoodle looks at a startup’s DNA, not its growth and development.

That’s also why the predictor wouldn’t provide a score for VentureBeat as its exists today, only as it was in January 2008 (before I joined). Now we’re too advanced, apparently. 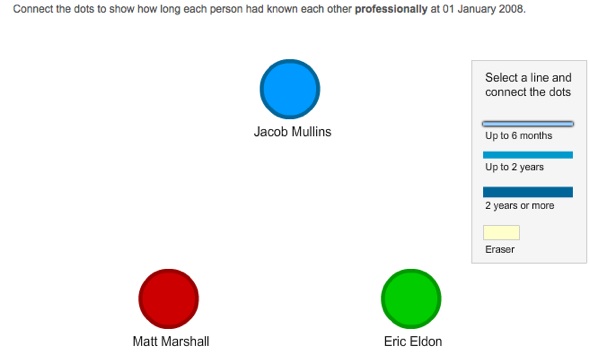 After answering each question as best I could (I had to fudge a bit, since I don’t know all the biographical details of everyone on the team, nor have I taken a close look at VentureBeat’s finances), YouNoodle told me that that we’ll be valued at $33.7 million at the beginning of 2011. In comparison, YouNoodle apparently valued TechCrunch at $87.4 million, and predicted its own 2010 value at $96 million.

To get a better sense of YouNoodle’s accuracy, TechCrunch asked the company to calculate a few more valuations of high-profile companies based on available information about their early stages. Goodson sent the analysis along to me. In cases where real-world numbers are available for comparison, YouNoodle was usually a bit off. For example, it predicted a $124 million valuation for social application startup Slide, and a $71 million valuation for competitor RockYou. As of their most recent fundings, the companies were actually valued $550 million and $250 million, respectively. That’s pretty far off, but Goodson notes that YouNoodle did predict that Slide’s founding team was stronger.

On the other hand, YouNoodle came quite close for semantic search startup Powerset — it gave a valuation of $104 million, and indeed, Microsoft acquired Powerset for a little more than $100 million.

So is there anything to YouNoodle’s claims? It’s hard to say. I do think that the valuations, while a nice attention-getter, are actually the least useful part of what the startup predictor offers, because they’re not based on a full picture, and it’s already clear that they can miss the mark by a lot. But the YouNoodle rating (VentureBeat’s was 304 out of 1,000) could be a good way to compare different companies — so if Startup X gets a rating of 300 and Startup Y gets a rating of 400, people might eventually feel confident saying that Startup Y has a stronger founding team, and that could be one of the factors to consider when making a deal.