YouTube today rolled out the ability to share videos with contacts directly in its mobile app for Android and iOS. Users can chat about shared videos using text, react with emoji, like messages with a heart, reply with other videos, and invite more friends to the conversation (up to a maximum of 30 people per group message).

YouTube first started testing letting groups of users share and talk about videos in May 2016. The company then pushed the feature to Canada in January 2017 as a test, since Canadians share more videos online than any other nation. After some tweaks, the Google-owned company is now pushing it out to all its Android and iOS users.

We asked YouTube what exactly it has changed between then and now. “We’ve been improving the feature since our experiments began last year,” a YouTube spokesperson told VentureBeat. “For example, we’ve made changes to the chat visual; and we’ve made the video stick to the top of the chat when scrolling down, to allow replying and chatting while watching a video; and we’ll continue making improvements.”

The new feature is accessible via the new “Shared” tab in the YouTube mobile app: 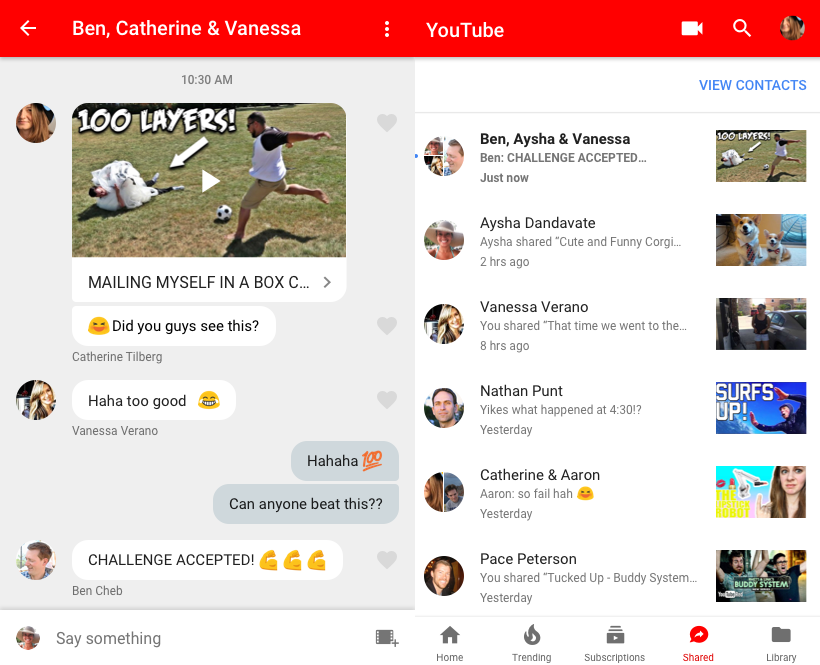 To try it, you have to first invite friends from your contact list by SMS or by sending them an invitation link (via email, social network, or messaging app). In other words, you have to invite them using any of the existing ways you already rely on to share videos.

This is not a sharing feature — this is messaging

YouTube calls this a sharing feature, but that’s not really accurate. YouTube already has sharing functionality — the app simply tells Android and iOS it wants to send a link and the operating system lets you pick from a list of apps to finish the task.

Instead, the sharing tab is really a chat interface. It’s meant for discussing YouTube videos (you can chat while the video is playing), but you can use it to discuss anything you want. The first thing I tried with YouTube chat is to send a Vimeo video link. Then I sent a Facebook link to my profile. All the links I tried worked, no questions asked. And of course, links aren’t required — you can just add contacts and chat to them with only text, right within the YouTube app.

In other words, YouTube has become yet another Google messaging app, on top of Android Messages, Allo, Duo, Hangouts Chat, and Hangouts Meet. Android Messages is part of Google’s SMS and RCS strategy on Android, while the other four are chatting and video calling solutions for consumers and enterprises, respectively. YouTube presumably falls into the consumer category.

I don’t really expect YouTube to limit the chat functionality to only its own videos, but I do expect the sharing section to do a lot more. Sure, it lets you watch videos inline. And related videos are right there, which will probably come in handy (and further boost views). But it doesn’t go far enough to differentiate itself.

Want to watch a video together with your friends simultaneously? You can’t.

What about sharing a curated playlist of videos? No dice.

How about leaving comments during specific parts of a video so your friends can see them when they watch it? Nope.

YouTube’s chat interface does almost everything your existing messaging apps already do, and all of those already do a lot more. As such, it’s a messaging app that nobody will switch to. On the bright side, unlike Allo and Duo, YouTube chat doesn’t have to build an audience from scratch — YouTube already sees 1.5 billion monthly logged-in users.

That may be enough to make this chat/sharing tab a minor success. Nobody will ditch Facebook Messenger and WhatsApp for YouTube, but as long as people watch more videos, Google will probably deem it a useful addition.