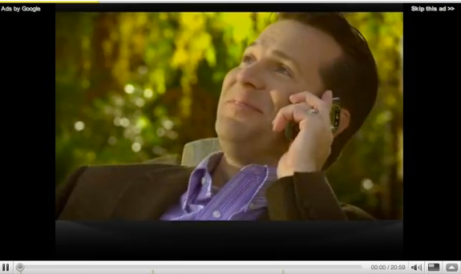 YouTube has officially launched TrueView, a new ad format that will let viewers skip ads choose one from a selection.

At a time when online viewers are fickle with their attention and video providers are burdened with finding ways to monetize that attention, this is the latest in a slew of video advertising experiments.

When an ad begins playing, a countdown timer will appear for five seconds, after which time the viewer may press a button on the top-right to skip the ad. If they choose to skip an ad, they’ll be jumped to their content — no questions asked. Alternatively, the advertiser can present the viewer with a choice of ads and let them choose the one to watch, a technique that has been used by competitor Hulu for some time.

The idea of a skippable ad may sound counter-intuitive at a time when the lack of a TiVo-like fastforward button on the Internet is seen as a holy grail for advertisers, but YouTube will only be asking advertisers to pay for ad views in which the viewer doesn’t skip the ad. Which means they’ll only be paying for potentially interested ad viewers who are more likely interested in their product.

Last year, YouTube found in an experiment that as many as 70% of viewers abandon videos when confronted with a long pre-roll ad. So, the idea of a skippable ad, even if it doesn’t lead to an ad sale for YouTube or impression for the advertiser, will at the very least work toward ensuring another viewer isn’t abandoning the video sharing site.

Worth noting is that YouTube is only offering the TrueView choice to advertisers, who can still choose to use the traditional ad format. While there are only a handful of videos that are currently making use of TrueView, the number is likely to grow as more advertisers begin experimenting with the format.