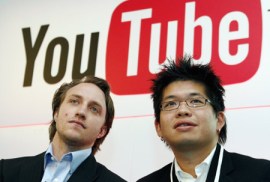 Fifteen million viewers watched CSI on Thursday night, making it the most-popular show on television. On that same day, YouTube served over a billion video clips — 66 times the number of views CSI got.

Yet YouTube owner Google is currently losing an estimated $1.5 million per day on the service, according to basic math done on some analyst reports by Internet Evolution blogger David Silversmith.

YouTube’s story has changed a lot from the big expectations of three years ago. At the time, the Internet economy was rushing forward, propelled by Web 2.0 startups and Google’s seemingly unlimited cash to spend buying other companies.

YouTube founders Chad Hurley and Steve Chen became media darlings and multi-multimillionaires. They announced their acquisition by Google via, duh, a YouTube video, in which Hurley ad-libbed that “two kings have gotten together.” The two seemed destined to follow in the footsteps of nerd-hero Google founders Larry Page and Sergey Brin.

But instead of taking the kingdom to the next level, YouTube has run up a huge video bandwidth bill, while not drawing in as much ad spending as everyone had expected. These days, YouTube is plastered with more and more intrusive ads, while Hurley and Chen are hard to find. Is there anything they can do? Maybe not. French video-sharing site Dailymotion hasn’t done any better, blowing through $34 million in funding on the cost of serving video as opposed to text content.

Years from now, YouTube will embody Web 2.0 expectations and disappointments. It’s changed the way we watch video, and it’s created a whole new class of video makers. YouTube has become our Library of Alexandria for video. But at some point, Google’s bad-cop CEO, Eric Schmidt, will need to deal with the fact that this wonderful site is a money-loser.