I have to admit, I was a little skeptical when I heard YouTube was working to bring real-time interactivity to the site. But now that I’ve tinkered with the feature (dubbed “YouTube RealTime”), it’s clear that the popular online video portal was ripe for social chops. After all, half the fun of discovering content on YouTube comes from sharing it with friends.

As I mentioned yesterday, the crux of YouTube RealTime is its omnipresent toolbar. After logging into the site and installing the feature, the persistently updated RealTime toolbar parks itself at the bottom of the screen. In short, this widget is designed to keep users abreast of their friends’ activities on the site as they happen. So, for instance, if a YouTube friend is watching or commenting on a video, you’ll immediately receive a notification.

Though the toolbar stretches the entire length of the screen, it consists of four small tabs: one to turn the feature on/off, a “Watching Now” tab for snooping on your friends’ viewing habits, an “Online Friends” section letting you know who’s logged in, and a notifications tab a laFacebook. It’s also worth noting that RealTime’s privacy features allow users to tweak how much/little is communicated, allowing some semblance of control over the flow of information. (See below)

Despite the low-profile look of RealTime (it’s pretty much just the toolbar for now), its impact on YouTube’s viewing experience is enormous. Instead of sharing videos by embedding or linking to them off-site, users can implicitly suggest content (or indulge their voyeuristic impulses) just by…well, using the site. This ability transforms previously ho-hum YouTube features — like adding friends and subscribing to their channels — into catalysts for social interaction. 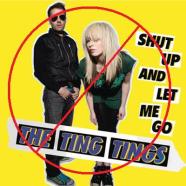 Case in point, after befriending fellow VentureBeatnik Anthony Ha through RealTime, he was able to see that I was watching the Ting Ting’s video for “Shut Up and Let Me Go.” This ultimately sparked a conversation about my questionable taste in music, and a YouTube search for “better” videos. For YouTube, enabling this kind of interaction could be a boon for upping overall engagement, as well as the average time users spend on the site. And, at a time when monetization is so important, this kind of “stickiness” could equate to more ad revenue. After all, all those freshly inked content deals don’t come cheap.

Of course, in spite of all this potential, RealTime is still very much in beta. During my testing phase, I noticed a number of small quirks — like how the tool bar has to reload anytime you switch pages. And, unfortunately, the mother or all interaction tools (i.e., a chat function) is still M.I.A. Sure, RealTime lets you see when friends comment on a video (or add it to their favorites), but it’s just not the same as having a dedicated chat client.

Still, for an early stab at adding real-time interactivity to YouTube, RealTime is fairly useful. During the beta trial period, YouTube is using an invite system (ala the early days of Gmail) for bringing users into the RealTime fold. If you’d like to have a peek at the service yourself, feel free to drop me a line in the comments and I’ll set up the first 50 respondents.