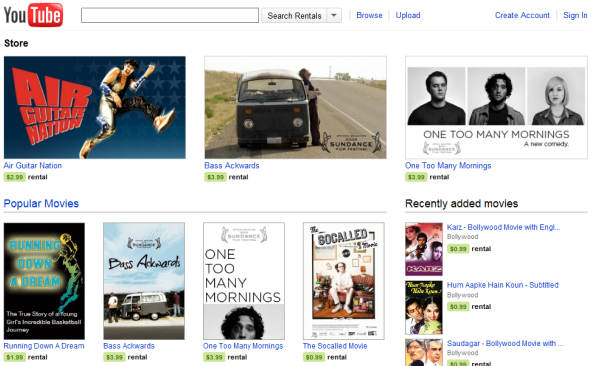 Many reported on the lackluster sales figures more than a week after YouTube started offering the Sundance films for rent, but I argued that the Sundance experiment wasn’t a complete failure. It offered YouTube a way to beta test its rental setup, and it still managed to give many people access to films they would otherwise never have seen.

The major reason its Sundance rentals didn’t sell very well is that YouTube didn’t promote them much, and finding the films on the site was far from intuitive. I’m hoping that’s something YouTube doesn’t repeat this time around, although the quiet nature of the store’s opening doesn’t bode well for strong marketing.

YouTube is jumping into a market where Apple’s iTunes Store currently reigns king, and it also doesn’t have the convenient ability to let you take the video offline or put it on your portable device. Google Video previously offered users the ability to download video files that they rented or purchased, and I wouldn’t be surprised if the same feature is soon integrated into YouTube’s store. YouTube is also a site that’s primarily associated with free content, and it remains to be seen if users will actually pay for content.

YouTube’s other big problem is that its content isn’t easily ported to your television. There are a few ways to do it right now — including built-in YouTube access in some high-end TVs and software offerings like Playon and Tversity that use game consoles  — but it’s hard to find specific content, and YouTube’s store currently isn’t integrated into any of the above methods.

For YouTube to have a shot at success with its rentals, it will need to work seriously on a decent television user interface (YouTube XL is a start, albeit a small one) and make it easier for consumers to get access to YouTube content on TVs as well.