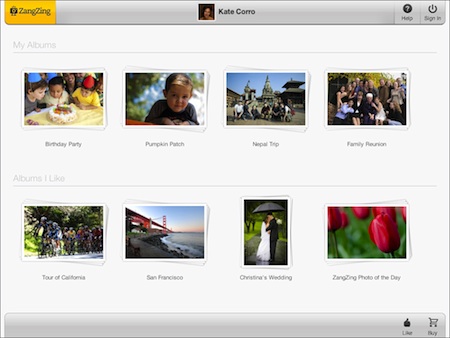 As startup after startup tries to create a new photo-sharing experience on mobile phones, the founders of San Francisco-based ZangZing say they looked at photo-sharing on the Web and found it lacking.

When I met with ZangZing last week, co-founder and chief executive Joseph Ansanelli argued that there’s a huge swath of people who aren’t interested in sharing their photos on existing services, for privacy or other reasons. So by taking a very different tack from the sharing philosophy exemplified by Facebook, Ansanelli hopes to reach a new audience.

There seem to be two big components to the company’s pitch. First, it offers an easy way to create group albums that you can invite friends to contribute to, even if they don’t have ZangZing accounts. Ansanelli said one of the inspirations for ZangZing came from a trip he took with co-founder Mauricio Alvarez, when they couldn’t combine their photos into one album afterwards. I’ve certainly been to events where it was a pain to track down the photos afterwards because they were spread across a bunch of different albums.

The other big selling point is ZangZing’s emphasis on privacy. ZangZing albums can be shared publicly, they can be “hidden” (so people will only find them if they know the URL), or they can be blocked to everyone but the ZangZing users you approve. So it’s easy to make sure the photos are only viewed by the people they were intended for.

Now, neither of these ideas is completely revolutionary — there are other services offering group albums and privacy controls. But ZangZing built its service around those ideas, and, judging from the demo I saw, it also offers a polished, well-thought-out experience. Ansanelli said he wanted to put the photos front-and-center, so they didn’t have to compete with advertising or other website elements for your attention, and yes, the photos look great. It should be easy to upload them from wherever you want, either from another service like Facebook or Flickr, or via email (which should make it easy to share from your phone), or from your computer through the ZangZing uploader.

Ansanelli and his co-founders have seed funded ZangZing with $1.5 million. The company plans to make money through a freemium model, where users can pay for premium features like extra storage.