The way to build a professional network is to stay in touch with everyone in it — or at least that’s the idea. Most people forget and lose touch. Zentact is trying to solve this problem, by reminding you to send interesting things on the web to people who might be interested in them.

Here’s how it works. You set up a list of contacts on the Zentact site, including friends’ names, email addresses, and short tags associated with them. You install a Firefox extension (Internet Explorer extension coming soon), and whenever you visit a site that contains your friend’s tags, you’ll be alerted to send the information on the site to them. 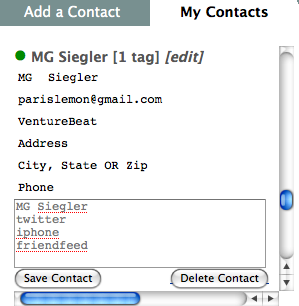 For example, I’ve included the tags “Twitter, iPhone, FriendFeed” for fellow VentureBeat writer MG Siegler. So whenever I’m reading an article that mentions one of those topics, I’ll see the Zentact  window pop up, suggesting that I email the article to him. The window contains a simple way to add a personalized message and send the article to him, without leaving the site I’m on. You can see how recently you’ve sent information to related contacts, based on the color of the dot next to each person’s name. A green dot means you’ve recently been in touch, a yellow dot means you’ve been in touch within the last couple of weeks, a red dot means it’s been awhile.

Zentact makes it easy for me to do this with all sorts of contacts — people who I’m not in touch with regularly, but mean to be. By sending items to them that they’ll find particularly interesting, I’m letting them know that I’m genuinely interested in what they care about. That’s the problem with regular old networking. People only get in touch with each other when they immediately need something.

I’ve been testing the site out since yesterday. It’s starting to work well, as I’ve taken care of two initial problems. One is that I imported my entire Gmail contact list into Zentact before getting started, so there’s a huge list of random email addresses showing up in my Zentact recommendations. Non-personal email addresses like “service,” not people I’m trying to stay in touch with. Zentact also integrates with Yahoo, Microsoft and LinkedIn contacts. Whenever you email someone, you get the option to add or update their contact information in Zentact. In hindsight, I should not have imported all of my Gmail contacts and just manually formed my Zentact contacts from people I’m already emailing regularly. 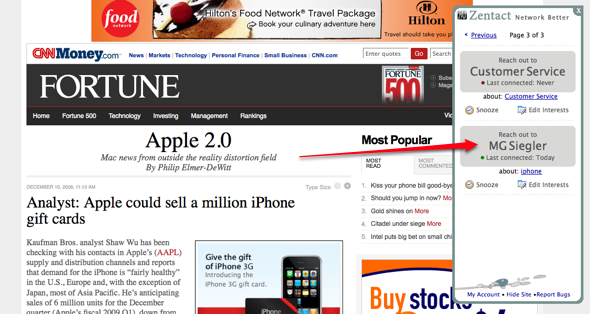 The other problem is that I get recommendations on sites that I don’t want to share. For example, I check tech news aggregator Techmeme often enough that sending items from the site to friends would just be overkill. Zentact automatically blocks obvious sites like Hotmail and Yahoo mail (those sites already offer ways to email people, in case you didn’t realize). The list of sites I’ve blocked manually so far is much more extensive. Besides Techmeme, it includes all the Google sites — like Gmail, Reader, News and its home search site — as well as Twitter, Memeorandum, Friendfeed, and other standard blogger fare.

I sent an annoying email to Eric Marcoullier last night, asking him to block these sites. Marcoullier is one of Zentact’s founders; he started the company after selling MyBlogLog to Yahoo last year (he’s also currently the co-founder of data synchronization service Gnip). Marcoullier and some of his MyBlogLog cofounders decided to start Zentact after their network-guru MyBlogLog cofounder, Scott Rafer, went off to start his own company (Lookery). Anyway, Marcoullier politely told me I was an edge case when it comes to blocking sites — he personally uses Zentact to share items from sites like Techmeme, for example. However, he said they’ll consider blocking more sites based on user feedback.

Speaking of, Zentact is in private beta, but we have limited invites to give out (here). Go to the site and enter PASSWORD to get started. Once you start using Zentact, your friends who receive emails from you through it will also get a link in the email footer, that allows them to join.

The site is still a little buggy, and the company says it takes a few days of tuning to really get it to give you the best recommendations. In my case, so far so good. I’m finding lots of articles about the iPhone to send MG.

Long-term, I can see Zentact being exceptionally useful to professional networkers, especially people in sales, marketing and business development. The company is working on integration with Salesforce and other customer relationship management systems, to make the pairing of existing networks and its recommendations more useful. It’s the sort of service that I can see people paying money for.