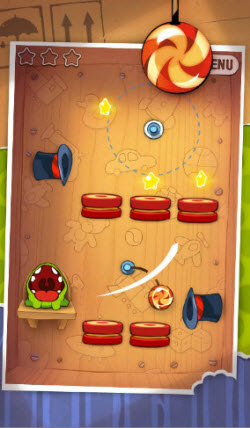 ZeptoLab is cashing in on its Cut the Rope smartphone game — which has been downloaded more than 100 million times — by announcing several licensing deals today with Hasbro, Mattel, JAKKS Pacific, and apparel company LF USA.

The merchandising agreements are part of the company’s push to become a global gaming brand and expand into new markets. The deals are similar to those struck by Rovio for its Angry Birds mobile game and Outfit7 for its Talking Tom series of mobile apps. And it makes sense, considering Cut the Rope has a bigger audience than a lot of TV shows.

ZeptoLab is also showing off a new version of its game today dubbed Cut the Rope Experiments: Bath Time. That game will soon debut on multiple platforms.

ZeptoLab is making the announcement at this year’s Toy Fair show in New York.

“We’re looking beyond where things are in the moment,” said Misha Lyalin, executive chairman at ZeptoLab, in a phone interview. “We have 100 million downloads now, but this is the beginning of where we are going to go.”

Under the deal with Mattel, ZeptoLab’s Om Nom character from Cut the Rope will become the basis of a variety of toys and games. One game will emulate the digital gameplay of Cut the Rope (pictured), where  the goal is to cut a rope in a way that solves various puzzles. The board game will use Mattel’s Active Touch technology, dubbed Apptivity, which allows kids to play with a physical toy on the surface of an iPad.

With Hasbro, ZeptoLab has a deal to bring co-branded board games to the market featuring Cut the Rope and Om Nom. Toymaker JAKKS Pacific will market stand-alone Cut the Rope branded game controllers for kids. And Li & Fung (LF USA) will create sleepwear and loungewear featuring Om Nom starting in the fall of 2012.

Cut the Rope was published by Chillingo in October 2010, has more than 30 million monthly active users, and is played in 125 countries. It is the brainchild of twin brothers Semyon and Efim Voinov in Moscow. Now in their 20s, they have been making games since they were 10.