Zimbra , the nifty messaging software owned by Yahoo, has unveiled the latest iteration of its collaboration features, and it’s impressive.

Zimbra, you’ll recall, arrived on the scene four years ago and wowed people with a Web service that uses AJAX technology to let you switch seamlessly between your mail, calendar and contacts – for example popping up maps automatically if you scrolled over an address in email, or allowing you to make a phone call if you clicked on a number within the email. The San Mateo, Calif. company got snapped up by Yahoo for $350 million last year. For me, Zimbra’s presentation at the Web 2.0 conference was my big aha moment on the power of Web 2.0 in the enterprise. But it has remained obscure until now, because it has worked mainly through third parties and businesses and hasn’t targeted consumers directly.

Now Zimbra’s future hangs in balance, given that its a competitor to Microsoft’s Outlook Exchange. If Micrsoft pulls off its acquisition of Yahoo, the software giant may or may not put Zimbra on the chopping block. If consumers have a say, though, Microsoft should leave Zimbra alone. Zimbra pushes collaboration features a lot further than Microsoft’s offerings and does so for a very low cost — not so good for Microsoft.

Zimbra’s Scott Dietzen walked me through the latest release, which he said is Zimbra’s most significant so far. Called the Zimbra Collaboration Suite 5.0, it extends Zimbra access across most desktop operating systems and for the first time supports Blackberry.

It offers three new features: a new IM feature, a way to drag and drop anything on your desktop directly into your Zimbra application, and — most compelling of all — a Zimbra desktop application.

With IM, your IM box sits on top of your application, and you can IM while composing email. But Zimbra’s IM supports calls to other IM clients, including Yahoo Messenger, and the IM clients of Microsoft, Google and AOL. It uses the messaging and presence protocol XMPP with a Zimbra interface. The IM lets you see your voicemail and provides a way to click on a contact to call. It runs on Zimbra servers, but since Zimbra is open source and open standards, it offers you a gateway so that it works on Outlook, for example.

The drag-and-drop feature, called Zimbra Briefcase, lets you drag and drop any document on your desktop into your Zimbra application on the browser – and that document is then stored and indexed on Zimbra’s servers so it’s available to be accessed anywhere.

Meanwhile, Zimbra’s application lets you share documents with other users from a popup box within the browser. While competitor Microsoft has bundled its Sharepoint software into its Outlook Exchange product to let you share documents from within Exchange, Zimbra’s sharing takes place within the same application, so it’s more seamless in mashing up with other applications, such as Yahoo properties. You can email yourself photos from your Flickr account, for example.

The Zimbra desktop is an install and can run on all Macs, Linux or Windows machines. A mini Zimbra server tracks your mailbox, so sophisticated search and other mashups all happen on your desktop as if you were on the Web. A Zimbra server on the back-end talks with local javascript code that manages your mailbox. Any POP or IMAP-supported server can be synced with the Zimbra client. This means Zimbra can reach folks who have never used it before because they didn’t have a Zimbra server. It lets you sync it with an Outlook Exchange server and continue to use Zimbra’s features within Outlook.

And all this, for free — at least, the open source version. The commercially supported edition is available for a 60-day free trial on the Zimbra Website.

In sum, the new features include:

Zimba says more than 300 new universities have adopted its software in the past year. 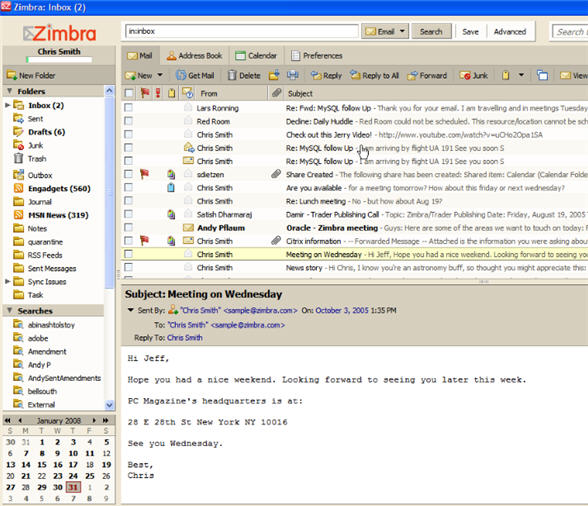 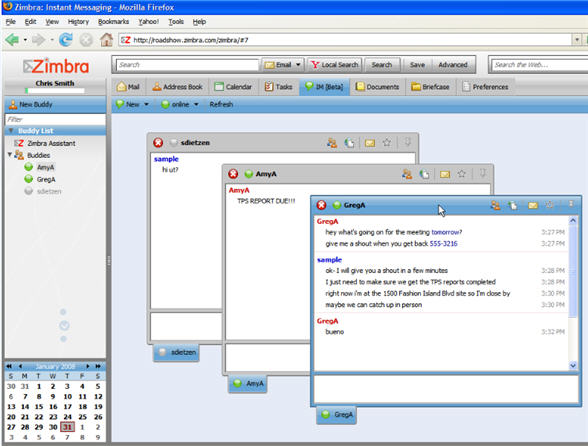 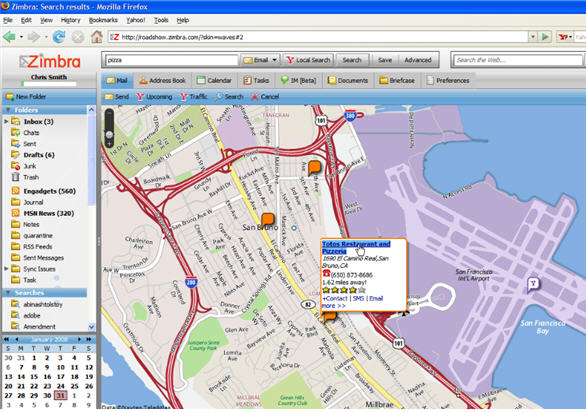