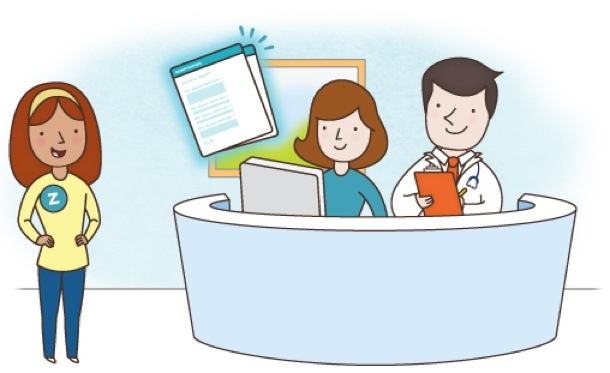 ZocDoc is making a huge step forward in its mission to simplify connecting patients with doctors. The company today announced ZocDoc Check-In, a feature that lets you complete medical forms before an appointment, and prepopulates that information for future doctor visits.

ZocDoc, one of New York City’s hottest startups, boasts that this is the first major product it’s added since launching in 2007. The company’s core service lets patients quickly find doctors (who pay $300 a month to list on the service) and book appointments online or through its mobile apps. ZocDoc now serves more than 1.8 million patients per month.

“It’s something [the check-in product] we’ve been developing and testing for some time now, but we wanted to perfect it before rolling it out more broadly,” ZocDoc founder and CEO Cyrus Massoumi told VentureBeat over e-mail today, when asked how long the company was working on the new feature. “Not only is there a highly complex engineering and data entry effort involved in uploading or converting each practice’s forms and tagging each field. There’s also a tremendous human engineering piece to this. We needed to extensively test this with some of our practices prior to launch, to ensure that the training we provided led to good adoption among practices and offered a stellar experience for patients.”

ZocDoc Check-In is free for both patients and doctors, and the company says around 10 percent of patients will have access to the feature today. Being able to fill out paperwork early was the most requested feature from patients, ZocDoc says. Not surprisingly, medical officers testing ZocDoc Check-In have reported more efficient workflows and increased accuracy for paperwork.

“Our goal has always been to build products that empower patients and address problems in healthcare that haven’t yet been solved,” Massoumi said. “In launching ZocDoc, we learned that in order to meaningfully shift behavior on both ends of the healthcare system, it’s crucial to pursue mutually beneficial solutions that can address pain points for patients as well as doctors.”

Currently the feature is only available for desktop use, Massoumi tells me the company isn’t looking into a mobile version yet.

ZocDoc’s service now covers doctor appointments in 31 major metropolitan areas, and the company says it covers more than one-third of people in the U.S.

The company has raised around $95 million so far, including a large $50 million round last year from DST Global.