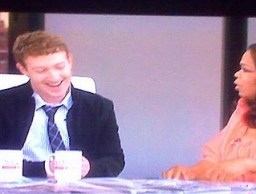 But in this case, there’s an unspoken message. Remember last year when word went out that Zuckerberg’s leadership was in doubt? It was around that time Facebook’s founder sprouted a necktie. 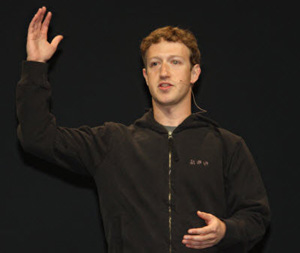 A year and some months later, Zuckerberg has proven that he can run Facebook at least as well as anyone else. It helps that he controls three of five board seats, but don’t kid yourself. There’s a line of more experienced execs who’ve made it clear they would gladly take over the reins and bring adult supervision to Facebook.

Zuckerberg’s hoodie sends two messages. First: “I’m not going anywhere, get used to it.” And second: “You can’t buy fashion sense. I tried.”

Update: Reader Max Zimmerman explains the iconography over Mark’s heart: “Zuck is wearing a Facebook Hoodie. The symbols on his chest are the icons for Friend Requests, Messages, and Noticiations (the same ones you see at the top left of facebook.com.)”