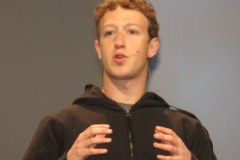 Mark Zuckerberg, Facebook’s baby-faced founder, is under a lot of criticism for his social network’s personal privacy policies. But you have to give the guy this: You don’t have to guess where he’s coming from. Zuckerberg shares online more than any other high-profile tech CEO. More than anyone else, he’s living up to the Cluetrain Manifesto image of the transparent, accessible corporate chief who talks directly and publicly to his customers.

Ironically, Zuckerberg’s own Facebook profile isn’t totally public. But the inside view of Facebook he dishes out is much more valuable than knowing his hometown or what political party he votes for.

The 26-year-old social network builder seems to enjoy writing for the masses more than most execs. He composed a column for the Washington Post this past week in hopes of explaining the company’s actions and directions (WaPo CEO Donald Graham sits on Facebook’s board of directors.)

Steve Jobs is known to answer an email or two, and to type the occasional thought piece. But Zuckerberg is out there on the Internet all the time, flogging his company’s milestones and, from the start, responding in public to privacy complaints about Facebook.

The Washington Post piece was a smart move. Not just because the WaPo is a widely read, influential newspaper, but because the WaPo has great editors. Zuck’s personal attitude toward privacy had already become more clear in recent weeks, but his editors at the Post got him to whittle it down to one breath:

But wait, there’s more! Over the weekend, Zuckerberg emailed popular tech blogger Robert Scoble in response to Scoble’s harsh criticism of Facebook policies. In the message, Zuckerberg said something most CEOs would refuse to put in writing: “I know we’ve made a bunch of mistakes.”