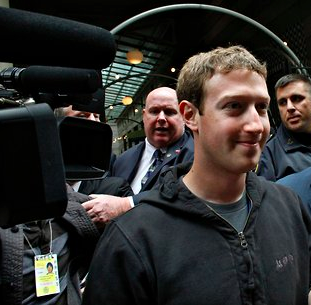 That little anecdote about Facebook’s roadshow meeting in New York was  widely reported this past week, but it’s being picked up as symbolic of Facebook chief executive Mark Zuckerberg’s indifference to Wall Street.

For those of you who missed the report, Zuckerbeg was still in the men’s room as the audience of Wall Street heavy-hitters waited for him outside in the ballroom of the Sheraton hotel on Monday. His deputy, Sheryl Sandberg was apparently forced to get started with questions and answers while they waited for him. When he did come out, he wore a gray hoodie, which was considered a snub by some of the buttoned up suits of Wall Street. Here was Zuckerberg, supposedly trying to sell the street on the merits of Facebook’s IPO, and he just wasn’t taking them seriously.

The anecdote anchors the NYT story this morning about Zuckerberg.

Arguably, it’s exactly Zuckerberg’s defiance, and his focus on doing what is important to grow his company, and impatience with formalities that interfere with that focus, that make him such a strong product leader. Investors in Facebook better get used to it, because this isn’t going to change.

Michael Pachter, an analyst for Wedbush Securities, also in widely reported remarks, said Zuckerberg’s actions were signs of immaturity. Pachter likened him to Steve Jobs, in that he’s an eccentric leader who doesn’t want to answer to anyone. Pachter says Jobs’ attitude was a big reason he was forced out of Apple early in his career. Jobs was able to return only after learning some lessons. And only then did he lead his company to its greatest heights.

It’s that worry, about whether Zuck is mature enough to lead the company, that accounts for the different accounts going on right now about how Wall Street is embracing Facebook’s IPO plans. Some are saying there is robust investor demand for the IPO shares, while other reports suggest that there is weakness. In fact, those two reports can be compatible, because the latter one referred mainly to Wall Street institutional investor appetite, and was simply citing a few representatives of that group of investors. If Facebook decides to rely on individual investors — the non-suits — there’s plenty of interest in the IPO.

Despite his critical comments, analyst Pachter is recommending investors buy the company’s stock — and that’s even though he doubts whether Zuckerberg is the right person to lead the company.

For now, Zuckerberg will be firmly in control, and he’s done very well so far along the road. At just eight years old, Facebook is about to be valued somewhere close to $100 billion as a public company, one of the biggest, if not the biggest accomplishments of an entrepreneur yet. It’s just way too early to start asking whether this guy is fit to run the company. He’s already come a long way as a leader, as I documented three years ago.

As long as Facebook continues to grow revenue and profits decently over the next few years, my guess is there won’t be any serious question about his leadership. But if he fails to execute, you can be sure eyes will soon turn toward the more polished Sandberg for direction — and no, it wouldn’t come as a surprise if the board has to orchestrate a coup to put her in that leadership position (like what happened to Jobs).