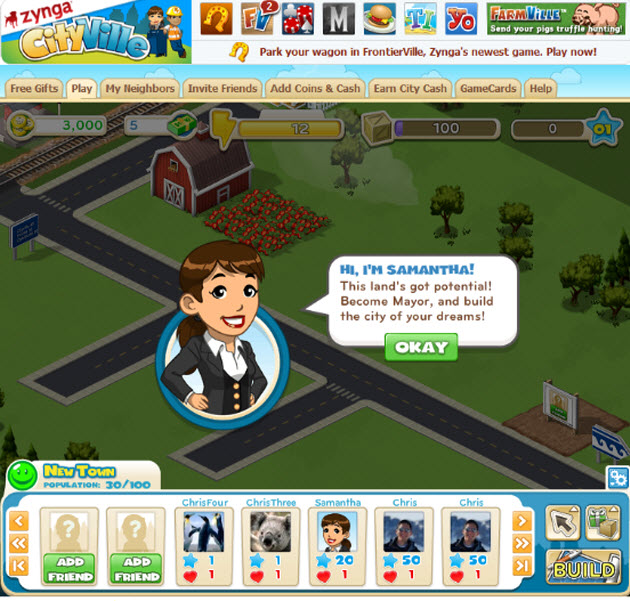 Zynga said today that it had its best social game launch ever with the debut of CityVille last week. In its first 24 hours, more than 290,000 people played the city-building simulation game on Facebook.

That’s important to the company, which is the largest app publisher on Facebook, as it constantly needs to add new players in order to make up for those who stop playing its games. Past Zynga games that have had good launches have gone on to having tens of millions of users.

Zynga’s previous biggest launch was FrontierVille, which had more than 116,000 players in its first day. Now, more than 6.5 million people play FrontierVille every day. So far, more than 2.7 million homes have been built in CityVille. Residents have created 500,000 bakeries and laid down 5 million sections of road, and 25 percent of players have set up franchises in their friends’ games. It looks like Zynga has another hit on its hands.

The company certainly needs the hits. Back in the spring, it had more than 260 million monthly active users on Facebook, according to market researcher AppData. Now the company has 193.8 million users. That’s due in no small part to the fact that Facebook has shut down a channel that many game makers were using to virally spread word of their offerings (non-gamers had complained that these communications were spam). Zynga is still No. 1 on Facebook by far, but it needs games like CityVille to keep refreshing its audience. FarmVille is still Zynga’s top game with 53.8 million monthly active users, which is down from its peak at around 83 million.

AppData reports that CityVille has 916,799 monthly active players so far, including 251,860 gained today. It has a long way to go before it hits the top 15 on Facebook, where the lowest game has 12.8 million monthly active users.