Zynga is kicking off a month-long initiative supporting Breast Cancer Awareness Month in its Words With Friends social mobile game.

The event is Words With Hope, and the San Francisco game publisher will use it to highlight a word of hope and corresponding statements from people whose lives have been touched by breast cancer.

“We’ve all seen the statistics; 1-in-8 women in the U.S. will receive a breast cancer diagnosis in their lifetime,” said Deepthi Menon, senior vice president of Words With Friends at Zynga, in a statement. ”And we’ve seen the power that community can have in bolstering strength, courage, and humor during times of illness. Over the years, our players have shared their stories of friendship and support that they’ve found in Words With Friends, and we’re proud to be joined by these incredible, esteemed women to spotlight this cause that touches so many.”

The timing of the campaign is not great in one respect. Zynga acknowledged that it has been hacked recently, and a hacker claimed the breach netted the personal data of 218 million Words With Friends users. An investigation is pending. 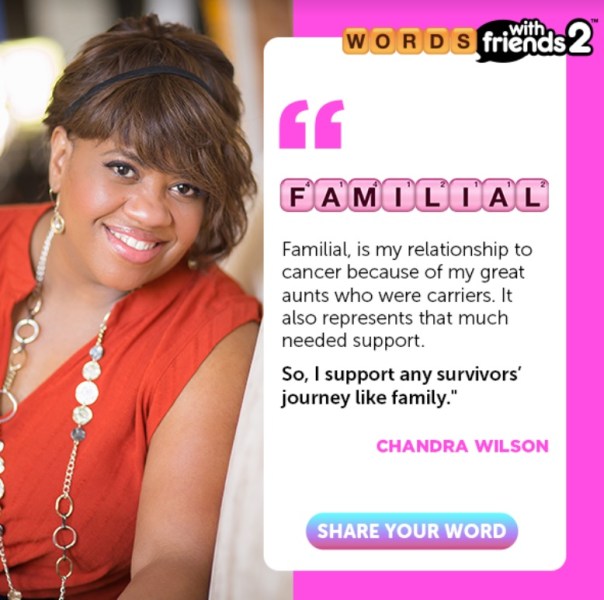 Above: Zynga’s campaign personalizes the fight on breast cancer.

Players don’t get a special incentive for playing with the word of the day (WOTD). In this case, the idea is to raise awareness about breast cancer. 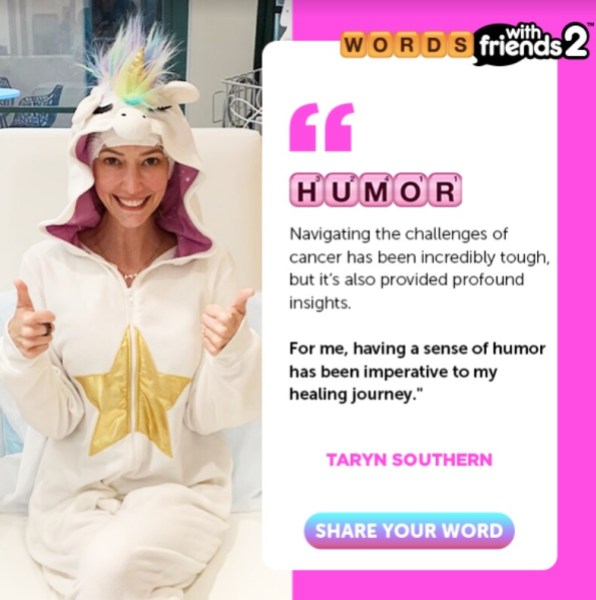 Above: Taryn Southern’s word of the day.

“Awareness and early detection are powerful tools for improving breast cancer outcomes — but words are powerful, too,” said Dr. Richard Wender, chief cancer control officer of the American Cancer Society, in a statement. “During October’s Breast Cancer Awareness Month, as well as year-round, keep words of support, compassion, caring and hope at the forefront, as we continue to battle this disease that affects so many of the people we love.”

For more information about Breast Cancer Awareness Month and other ways to get involved, visit go here. The #WordsWithHope campaign begins today with iconic singer and actress Olivia Newton-John, and her word, “thriver.”