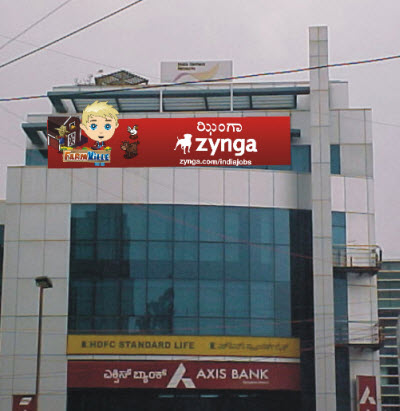 Zynga is announcing today that it will open an office in India to develop social games.

The office in Bangalore will be the company’s first outside of the U.S. The office is expected to hire about 100 people, mostly for game development and infrastructure to support Zynga’s games, which include the popular FarmVille.

Zynga has about 800 people now in offices in San Francisco, Baltimore, and Los Angeles. The new office says a lot about India’s growing importance in the world economy, as well as games.

Zynga has more than 239 million monthly active users for its Facebook games, making it the No. 1 Facebook developer and the biggest company in the social game industry. The company lets people play its games for free and makes money through the sale of virtual goods. That business model is expected to generate something like $400 million in revenues for Zynga in 2010, according to industry sources.

Meanwhile, India’s game market is rapidly expanding. India has about 81 million Internet users. It is expected to become the third largest online market behind China and the U.S. by 2013. Zynga hopes the opening of the local office will help spur demand for Zynga games in the Indian market.