Zynga is launching Harry Potter: Puzzles & Spells worldwide today on iOS and Android, and the game has a lot more depth than you would expect for a simple match-3 puzzle game.

It uses the simple mechanics of games like Bejeweled and Candy Crush Saga, but the team spent a couple of years refining it and building the lore and magic of the world of Harry Potter into the game, said creative directror Mark Turmell in an interview with GamesBeat. Rather than slap a brand name on a generic game, San Francisco-based Zynga set one of its biggest teams ever on making a game that incorporated a lot of the world created by author J.K. Rowling’s books and the Warner Bros. films.

It’s also the first major game that Zynga has launched in a while. It was in soft launch for many months, as Zynga continued to add new features to it. While based on simple matching gameplay, the title has a five-screen user interface that illustrates how much depth it has, said Turmell.

The game is important to Zynga, as it was produced by its core team in San Francisco. Many of the company’s other recent hits — Toy Blast, Empires & Puzzles, and Merge Magic — were created by other companies that Zynga acquired. 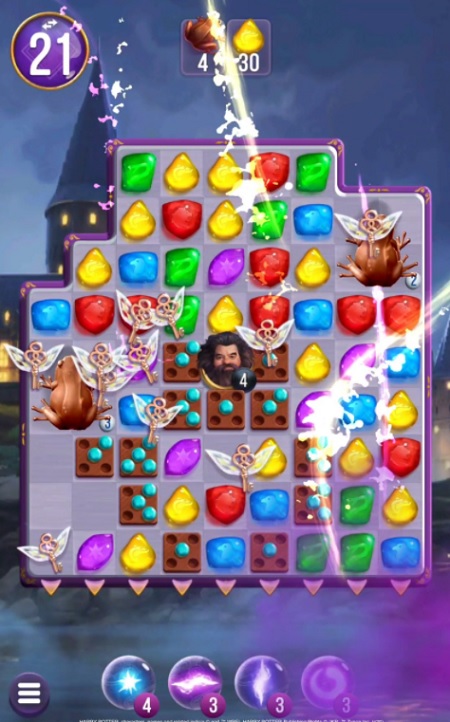 Above: Harry Potter: Puzzles & Spells pops out of the screen at you.

All told, the game has more than 1,000 puzzles. Zynga used AI to test whether the games could be completed by humans in a reasonable time frame, Turmell said.

“This is match-3 reimagined, or match-3 elevated, because the team has really gone the extra mile,” Turmell said. “We make sure the first-time player experiences are good. We roll the features out over the course of time. So you have time before you are exposed to the complexity.”

In the meta game, you can earn cards and collect them. The gameplay has a role-playing element to it. That’s pretty different from a lot of early match-3 games, but it’s where companies such as Jam City, Small Giant Games (which Zynga now owns), and others have taken the genre.

In an earlier interview, publishing president Bernard Kim said Zynga decided to include all the “iconic moments and memorable faces from the series” using live animations that pop out of the screen when you’re playing what would normally be a 2D gameboard with jewels on it. The idea was to take players back to their nostalgia for the series and weave a deeper story into the game.

The game has lots of spells, humor, soundtracks, and voiceover recordings from the Harry Potter films. The authentic lore of the Wizarding World has been woven into the story and images, with puzzles that feature hopping Chocolate Frogs, fluttering Winged Keys, battling wizard chess pieces, and other unexpected obstacles and objects. 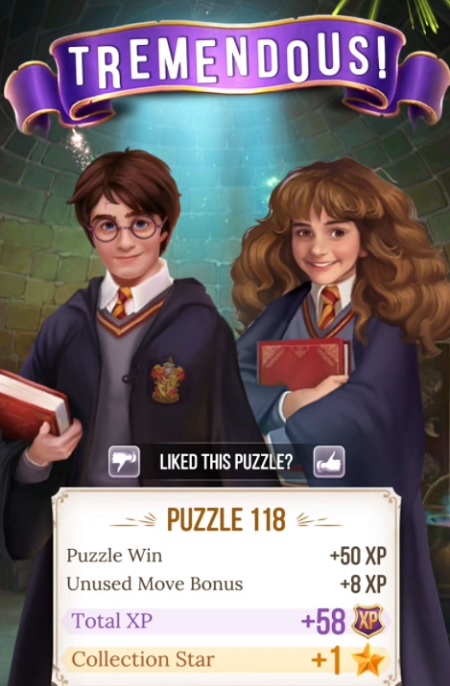 Players can spend real money in the game to buy virtual gold, which they can use to buy things like cards, extra lives, and boosters. But Turmell noted you can play the whole game for free if you wish. If you level up to become a Level 10 wizard, you get an extra move on the gameboard on every one of the main story puzzles.

The game opens in Diagon Alley with Hagrid welcoming the player. Players can journey on the Hogwarts Express, see Hagrid’s magical creatures, and experience Hermione casting the “Wingardium Leviosa” spell.

The game has clubs, which are like clans for the biggest fans, where players band together and chat. They can compete together to win prizes for their clubs and compete against other clubs. Players who complete a Daily Puzzle can earn prizes for the whole club, or just socialize with other players.

I asked if Zynga, a progressive company, had anything to say about Rowling’s recent controversy, where she got into arguments with transgender people on the internet. I heard crickets in the room, and a PR representative said the company had no comment on that.