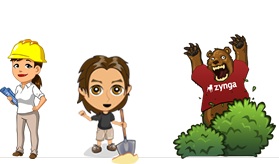 RewardVille has been in testing for the past few months, it creates a new virtual currency for Zynga games called zCoins. This helps Zynga establish a little independence from Facebook. Zynga and Facebook have a complicated relationship, with Zynga becoming the major success story on the Facebook platform while also trying to build a presence on other platforms, so that its destiny isn’t entirely in Mark Zuckerberg’s hands. Zynga and Facebook came close to a major falling out last year before Zynga finally agreed to use Facebook’s virtual currency, Facebook Credits.

The new program should encourage players to try out multiple Zynga games, not just its massive hits, CityVille and FarmVille, since they can only earn the maximum number of points if they play more than one game. And that, in turn, should make players more aware of Zynga as a company and a brand.

The idea is pretty straightforward. Users sign up at the RewardVille site, earning zPoints and zCoins for playing games across the Zynga network. In one day, users can earn 80 zPoints in a single game and 300 zPoints total, which they can redeem for virtual goods that aren’t available anywhere else. Players can also use zPoints and zCoins to send gifts to their friends in other Zynga games.