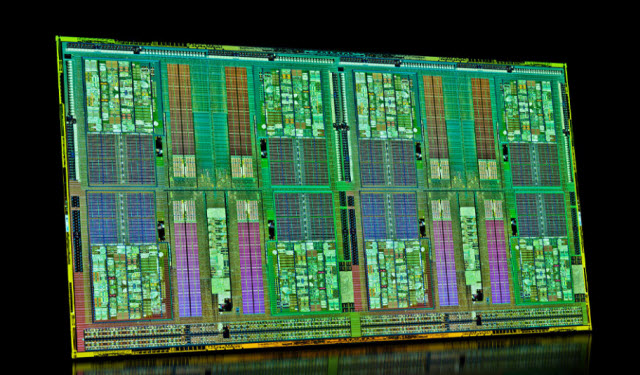 In a first for the PC industry, Advanced Micro Devices introduced a microprocessor today with 16 cores, or computing brains, on a single chip.

Sunnyvale, Calif.-based AMD is the primary competitor to the world’s biggest chip maker, Intel. While AMD is a perennial underdog, it can sometimes push forward with innovations ahead of Intel, as it is claiming it has today. These new chips are aimed at giving enterprise servers better performance and power efficiency.

The company is introducing the AMD Opteron 6200 family of processors, formerly code-named Interlagos. The chips give enterprises as much as 84 percent better performance, 73 percent better memory bandwidth, and better power efficiency with half the power per core. They save about two-thirds on floor space and two-thirds on platform costs.

The aim is to get businesses into cloud computing with more agility and efficiency, said Paul Struhsaker, corporate vice president of commercial business at AMD. The new chips use AMD’s Bulldozer computing cores, which debuted earlier this year. AMD is also introducing the AMD Opteron 4200 series, formerly code-named Valencia.

Systems using the new chips will be on the market in the coming days and weeks from Acer, Cray, Dell, Hewlett-Packard and others. AMD will target new embedded server processors for storage, telecommunications and networking applications. AMD’s portfolio of server processors now ranges from four cores to 16.