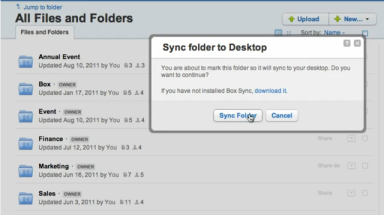 Box.net is now shipping its content over to Salesforce.com’s enterprise social network Chatter. Users can pull content from Box.net — like shared files and the comments attached to those files — in activity streams in Chatter. Chatter had around 60,000 customers when last reported, although that number has grown significantly since then, Salesforce.com CEO Marc Benioff told VentureBeat. Yammer, a Chatter competitor that has gained good traction in the enterprise social network space and is led by former PayPal graduate David Sacks, also has an existing partnership with Box.net.

“Our strategy is to be the social Switzerland where we integrate with any and all applications including Saleforce.com, SharePoint and many others,” Sacks told VentureBeat. “This announcement has no impact on that strategy.”

Box.net chief executive Aaron Levie made the announcement at the company’s first BoxWorks annual conference in San Francisco, Calif. He said Box.net’s application on Google’s Android mobile operating system will now also come pre-loaded on the Motorola Xoom, the current flagship tablet for the company. Box.net unveiled plans to pre-load its mobile app on Samsung tablets in January this year. While Box.net is an enterprise application, it could punch a hole in the niche Dropbox has carved out as a mobile cloud storage provider for consumers.

“Box has to be the easiest way that you can securely share information in the enterprise. That’s the whole reason why software doesn’t work today — it’s cumbersome,” Levie said. “And for employees that want to use a tablet or a smartphone, the power of those devices are comparable to laptops just a few months ago, they’re becoming an integral part of the enterprise.”

The company also unveiled a new version of its desktop sharing app, Sync (pictured above). That application creates a folder for your desktop that automatically copies the information to a remote cloud-based server. The new version of Sync works across both Mac and PC computers. Any changes made to a file on a PC are immediately transferred over to the same file in the shared folder in the Mac. The process works the same way in the other direction.

Box.net recently turned down a buyout offer worth more than $500 million, as we reported exclusively earlier this month. Box.net previously raised $48 million in its most recent round of funding led by Emergence Capital in February. It is also in the process of finalizing an extension to that round of funding worth $35 million. The company has 6 million users. Some 60,000 businesses employ its cloud-storage software, including 77 percent of Fortune 500 companies. That figure is up from around 66 percent in February. The company is based in Palo Alto, Calif.