Photoshop, the go-to software for visual creatives everywhere, is expanding into the world of 3D printing in a big way.

Adobe announced today that it’s adding some significant 3D printing features to the Creative Cloud version of Photoshop, which it wants to one of the core tools in the 3D designer’s toolbox. Designers can now use the software to not only colorize and texturize 3D objects, but design them as well.

As Adobe product manager Andy Lauta points out, this is the first time 3D printing support has been added to a mainstream creative tool like Photoshop. That alone makes Adobe’s move significant.

“This is going to be an exciting opportunity for our consumer base. And it’s going to have a big impact on 3D printing industry as well,” Lauta said during a press briefing on Tuesday.

For Adobe, the move is all about drawing more users to its subscription-based Creative Cloud suite, which has already added 1.4 million users since its introduction in 2011.

Adobe, however, isn’t trying to make Photoshop the most powerful 3D modeling tool (it’s leaving that to companies like Autodesk). Instead, the company wants Photoshop to be closer to a finishing tool, the go-to software people use right before they’re ready to print. 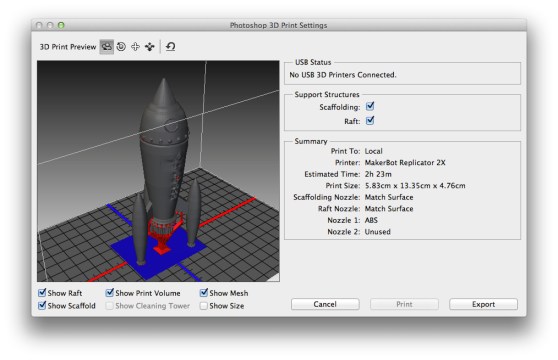 That’s a big deal. Right now, one of the bigger problems with printing 3D designs is that it’s often impossible to tell until it’s too late whether a design will print properly. Objects with insufficiently thick walls, for example, invariably end up as chaotic strings of plastic when they’re printed out. And that’s a major waste of time and expensive plastic.

Adobe wants to take that uncertainty out of the process. By adding features like automated mesh repair (which tells users when their designs are structurally unsound) and support structure generation, Adobe is removing some of the most complex parts of the 3D printing process.

There are big partnerships here as well. Not only does Photoshop support major printers like the MakerBot Replicator, but Adobe has also teamed up with 3D printing service company Shapeways to ensure that users can print in the full range of the company’s materials.

Photoshop also now makes it easier for designers to upload to Sketchfab, a 3D design portfolio site that VentureBeat has covered a few times over the past year.

And the best part? All of these new 3D printing features are available to Creative Cloud subscribers right now. That’s the power of cloud, after all.