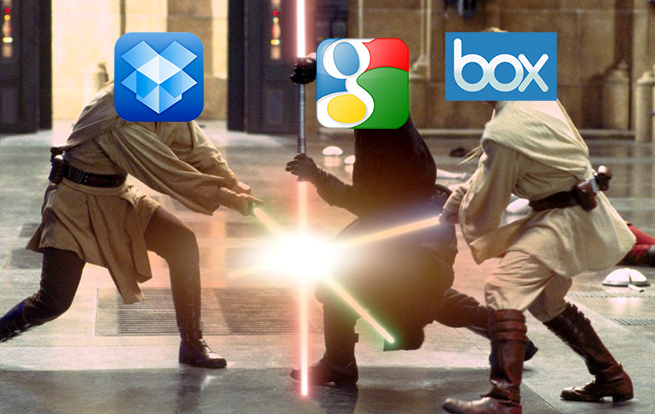 We’ve seen so many leaks in the past few weeks to know the release of Google’s Drive cloud storage product is imminent. Should the biggest storage players like Dropbox and Box be quaking in their boots?

Drive has been in the making since 2007, when now-CEO Larry Page worked internally with other Googlers to launch a service called “G Drive.” The project was indefinitely postponed. During that same year, Dropbox was founded and has gone on to become one of the most widely used cloud-storage solutions, mostly because of its accessibility across disparate platforms.

Then there’s Box, the young hot storage startup that is targeting enterprise and rapidly innovating with tools like OneCloud that let third-party apps sync data on mobile devices.

“Dropbox and Box have filled a need that businesses and consumers need with cloud file storage, and people seem to really like them,” Reichman said. “That’s really good … but it’s very tough to be in a price battle with Google.”

When it comes to price, Google will almost certainly be offering 5GB of free space to every Google user. Box gives all users 5GB free while Dropbox only offers 2GB free per user. Like the other services, Google will offer Drive in a freemium model that lets users buy additional storage as needed.

Besides Dropbox and Box, Google will also face off against formidable players like Microsoft’s SkyDrive, Amazon CloudDrive, SugarSync, and Egnyte. Each of these players have tried to differentiate themselves with different groups. SugarSync wants to own the consumer space with the easiest possible cloud-based backup, while Egnyte is carving a niche as a brazen business-only solution.

“It’s a fairly open market, so the established players shouldn’t be petrified, but they should be worried,” Reichman said.

The obvious appeal for Drive will be integration with other Google services. Expect that black bar that is attached to every Google service to add the word “Drive.”

“If you already use services like Voice, Gmail, and Docs, this can add to that,” Reichman explained. “There will be a lot of business that already use Google Apps that could consider Drive. Google hasn’t had huge traction with the Fortune 50, but it is being used by more businesses than you might think.”

Reichman sees Google’s focus on a closed ecosystem as a key weakness. He believes Google may be unwilling to integrate Drive into other services as much as other cloud storage providers.

“Google likely won’t do a good job of integrating with Microsoft Sharepoint and Exchange,” Reichman said. “And when it comes to third-party applications altogether, it will be less open, based on its history.”

Not surprisingly, Dropbox and Box did not respond to requests for comment about this article.

We’ll keep an ear to the ground on the latest about Google Drive’s imminent launch. If you have anything to share, drop me a line at “sean AT venturebeat.com.”