Evernote released its latest update for Mac tricked out with over 100 new features. A post on the company blog claims that this is Evernote’s most significant update yet, based off a year of a year of consideration and development. User experience is at the forefront of the redesign.

Evernote is a popular digital notebook that lets people capture information from around the web and organize them into accessible lists. Like a notebook, it can be used for anything from staying on top of 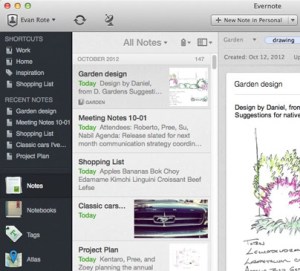 daily tasks, remembering things, saving favorite webpages, conducting research, planning trips, and collaborating on projects. Evernote is available across multiple operating systems and platforms and has been through five iterations since its inception in 2007.

Upon opening Evernote 5 on a Mac desktop, users are now presented with a left panel that offers shortcuts to frequently used and important notes, as well as the five most recent notes. Notebooks have also received a makeover. Personal and Shared lists are now combined on one screen, which you can sort and search by name or owner.

The new Atlas view presents all notes on a map because geography is often relevant to creating context for the lists, and The Note List now has a Card View which presents notes in Pinterest like “beautiful squares.” The Note Editor and search functions have also received improvements. Watch this video to see the new Evernote for yourself:

Earlier this month, Evernote released a preview of the Evernote 5 for iPhone, iPad, and iPod Touch, which is coming soon. These major changes arrive six months after Evernote raised $70 million in its fourth found of institutional funding. The company has raised $166 million to date and is valued a $1 billion.