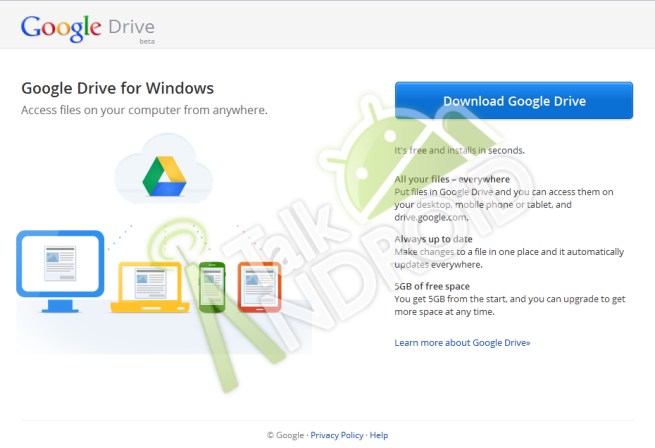 Google’s upcoming Drive cloud-storage service will reportedly offer each of its users 5GB of cloud storage for free, according to a screenshot from TalkAndroid.

In early February, we heard that Google would soon launch a cloud storage service similar to Dropbox, Box, Microsoft’s SkyDrive, and Amazon CloudDrive. Drive’s offerings will most closely resemble Dropbox, which gives users access to cloud-connected storage on smartphones, tablets, Macs, and PCs.

The Drive service will likely launch the first week of April, but Google has been super silent about anything concerning the project. The first leaked screenshot concerning Drive suggested 2GB of free storage like Dropbox offers, but now it looks like the service will give Google users 5GB of free storage, akin to what Box offers. Giving every user 5GB of storage would certainly make a splash with average users and businesses. It might attract users away from other offerings, especially if they already use Google Docs for collaboration and want to stick to one provider.

Drive has a long history with Google even though it never launched. In 2007, now-CEO Larry Page had worked internally with other Googlers on a service called “G Drive,” but it was postponed indefinitely. During that same year, Dropbox was founded and has gone on to become one of the most widely used cloud-storage solutions with consumers, mostly because of its availability and ease of use across multiple platforms.