Scoring sales leads based on computer-generated predictions of how hot they will be — that’s great, but it’s not enough of a step forward for data startup Infer.

At a company event in San Francisco later today, Infer cofounder and chief executive Vik Singh will announce a simple new user interface for setting powerful priorities for leads as well as new features that can give salespeople good ideas about how they should spend their time.

“This is going to allow companies to do a variety of things to drive up conversions,” Singh said in an interview with VentureBeat.

Infer’s cloud-based software integrates its technology with popular customer-relationship management software, like Salesforce.com, as well as marketing-automation systems like Eloqua and Marketo.

Taking in data as it does from many seemingly unimportant sources — like whether a potential sales lead’s website has a shopping cart — and using it to improve marketing and sales processes positions startups like Infer as key innovators in these areas. The approach could lead to more sales.

Other newcomers analyzing lots of different kinds of data to boost sales include RelateIQ.

Infer, based in Palo Alto, Calif., has been riding on the $10 million round of funding it announced last April. Infer counts AdRoll, Box, Jive Software, Tableau, and Zendesk as customers.

Infer has been busy building a new self-service frontend for marketing and sales managers to train Infer’s system for categorizing and scoring leads. The startup has been slowly rolling out the new user interface on Infer.com to customers. It’s a step up from the previous user interface, which Infer engineers had to walk customers through, Singh said.

On the new system, a manager can log in and drag and drop sliders to adjust the parameters for the A, B, C, and D buckets for sales leads, based on the scores Infer has already assigned to the leads. Those dead-simple buckets will get pushed down into the interface that individual salespeople and marketers see alongside the leads they can work on. The whole point is to prevent such people from wasting time on leads that probably won’t become paying customers. 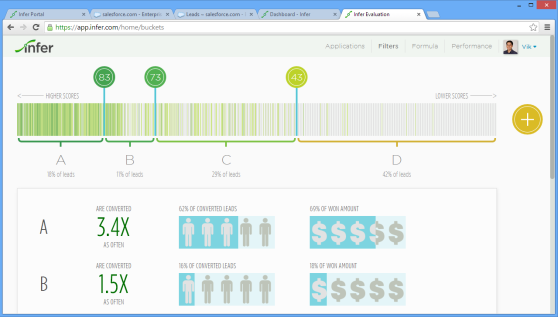 Managers can drill down to individual data points comprising the formulas for Infer’s lead scoring algorithm. A cluster of different-colored bubbles gives a cute-looking graphical representation of the weight of the factors in relation to one another. 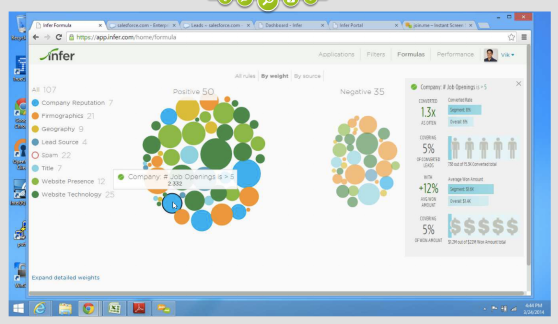 Above: Infer’s visualization of factors of lead scores.

Managers can tweak the rules in place for the algorithm, too. For instance, they can dictate that the number of job openings should be greater than 10, and they can make that the highest-priority rule.

A dashboard visualizes the results of the leads — which led purchases, which got rejected, and so on. If they don’t like the results, they can go back and change the configurations for the lead-scoring system. 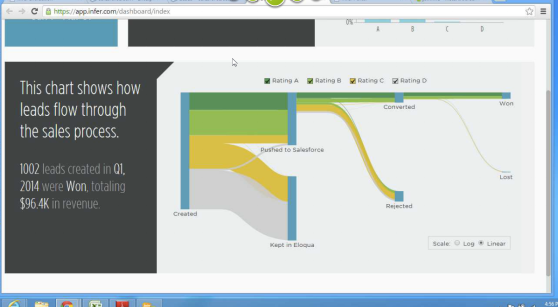 Above: Infer’s dashboard showing what happens to leads.

Infer is also adding to its own site a series of “applications,” or more practically, more ways to make sense of all the data Infer is analyzing. Infer lets managers assign certain categories of leads to particular salespeople. It shows tidbits of information from Google AdWords to show which campaigns are working better than others. And it provides tips on data points that managers might not have given much thought to, which can help marketers push our more applicable messaging.

“Infer.com becomes the starting point — the brain, if you will — for predictive leads, powering your key programs for sales and marketing,” Singh said. “This is what we’re focusing on, what we’re doubling down on.”