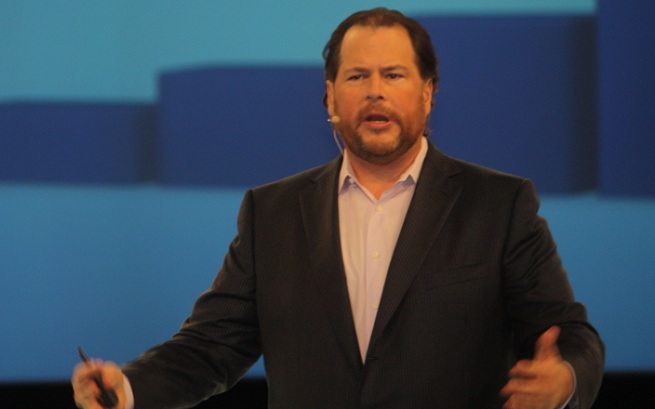 SAN FRANCISCO — “Are you pumped up and ready to go? We are here to excite you!” Marc Benioff addressed a screaming crowd at the Yerba Buena Center for the Arts this morning, after an opening performance by rapper MC Hammer.

It’s hard to believe this is a vendor-led cloud computing conference. The outspoken Salesforce took the stage for his keynote address at Dreamforce 2012 with one clear message: A “social revolution” is taking place, and his company wants to be the driving force behind it.

Benioff claimed that in the evolution of computing, entrepreneurs like Steve Jobs, Jeff Bezos, and Jack Dorsey have ushered trends like cloud and mobile, which have led to a shift to social business. He later claimed that the social revolution is a “trust revolution.” Not sure I buy it, but his overarching point is that customer satisfaction is becoming a central concern for enterprise startups. Why? Because social media has given them a voice. 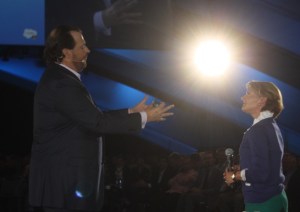 He referenced the IBM Chief Executive Officer Survey and made the point that for CEOs, social is the top priority for their enterprise. According to the survey, CEOs project social networking in the enterprise to grow by 256 percent over the next three years.

“That for me was when a light came on,” he said. Perhaps it was the “aha” moment that led to the $689 million acquisition of social media monitoring tool, Buddy Media. This was one of five acquisitions Salesforce made this year in a bid to be far more than just a customer relationship management (CRM) tool.

Benioff then invited one of Salesforce’s customers, General Electric’s Charlene Begley (pictured above), the president and CEO of the home and business division, to speak about how the business has changed to become more social. “It’s critical that we have efficient communication: It’s accelerated learning and finding new ways to bring value to customers,” said Begley.

Another big-name customer, Yelp‘s CEO Jeremy Stoppelman, added his thoughts, claiming that the future of social enterprise is mobile. One of the few controversial moments: Benioff said Yelp was one of the few companies that really understood how to make money through their mobile offering.

Salesforce.com announced Salesforce Touch, so you can use the app on any device. Built with HTML5, it enables you to access Salesforce’s apps on iOS and Android and tablets. It’s not just Salesforce’s mobile version, but it’s also a platform that Force.com developers can use to deploy their own applications.

Salesforce is opening up its Chatter app to both external collaborators and third-party apps. This app enables companies to create multiple private communities to communicate with vendors. “Think of this as Facebook for partners, but private and secure,” said Hilarie Koplow-McAdams, the president of the small and medium-sized business division.

This provides a link between your contact list and your social networks. Salesforce’s Data.com enables customers to easily fill in the missing links in contact information in the Sales Cloud. Today, the company released the Social Key, which enables customers to harness social data from Twitter, blogs, Facebook, and YouTube and link this to phone numbers and other traditional contact information. Salesforce has scheduled the Social Key for general availability during the second half of 2013.

Salesforce.com acquired Radian 6 and Buddy Media and announced it would integrate the technologies into Salesforce’s new product: Marketing Cloud. Chatter powers Marketing Cloud and pulls in real-time social data from Facebook and Twitter.

Salesforce invited Commonwealth Bank, one of Australia’s largest banks, to discuss how it’s  already using the tool. The bank uses Marketing Cloud to publish its content on Twitter and YouTube and enables customers to apply for a bank loan via Facebook or their smartphone and reach its customer service department on a 24-hour basis.

Salesforce Chatterbox: “Dropbox for the enterprise?”

Today, Salesforce announced the highly anticipated Salesforce Chatterbox. Is this a nod to rival cloud storage and collaboration tools, Dropbox and Box? Chatter is already used by 170,000 customers, including Dell and Virgin America, which gives Salesforce a ready-made customer base.

In a nutshell, Chatterbox enables business users to upload and share files across devices, including smartphones and tablets. The service is part of Salesforce’s ever-expanding portfolio of cloud services.

Today, Salesforce has entered into the HR software playing field but promises to incorporate more social elements than its competition, including Taleo and SAP-owned SuccessFactors. Work.com is currently used by big name customers like Spotify, LivingSocial, Facebook (one of the first customers), and Virgin America. “We built Work.com from the ground up to be social,” said John Wookey, the executive vice-president at Work.com at the Dreamforce conference today.

Wookey elaborated in more detail about the features employees and managers are already using in Work.com: goal-setting, analytics-based results, content-heavy performance reviews, and so on.

VentureBeat is reporting live from Dreamforce 2012.