KANSAS CITY, Kan. — Few U.S. startups are trying to reinvent search, and there’s a good reason for that. Google owns 67 percent of the market in the U.S. as smaller players like Bing and Yahoo fight for scraps.

But Kansas City, Kan.-based search startup Leap2 doesn’t seem to care that Google owns the market and knows exactly where it stands.

“Everybody wants to try to beat Google,” Leap2 director of product Tyler VanWinkle told me at its Google Fiber-equipped office space. “Is that a reality for us? Probably not. Let’s get real about that. … Google is really, really good at what Google does. They are good at PageRank and pulling up relevant articles. We feel like we’re doing something completely different from what Google is doing.”

While some might think Leap2 is already admitting defeat to the Google leviathan, let’s pull back a little.

Leap2 is one of a handful of startups making a splash in the quickly growing Kansas City startup scene, which has been given a recent spotlight thanks to Google’s decision to launch Google Fiber first in KC. The company raised $1.6 million back in late April, bringing its total raised to about $2 million.

The company was founded in early 2011 and has seven full-time employees. It has focused almost exclusively on making mobile search better with apps for iOS, Android, and Windows 8.

Just two and a half months ago, Leap2 quietly launched a desktop version. Looking at the desktop app for just a glance, you can see what Leap2 is trying to do. It’s a highly visual, almost Pinterest-like take on web search that uses some of Bing’s APIs for results. And it has been highly influenced by working on mobile search.

A single search on the desktop shows you previews of web pages, images, tweets, and more — all in different-sized boxes. Unlike Google, Bing, Yahoo, or DuckDuckGo, which focus mostly on text-based initial search results, Leap2 is about giving you a visual guide. For example, a search for “VentureBeat” on Leap2 shows recent articles, logos, tweets, and more. 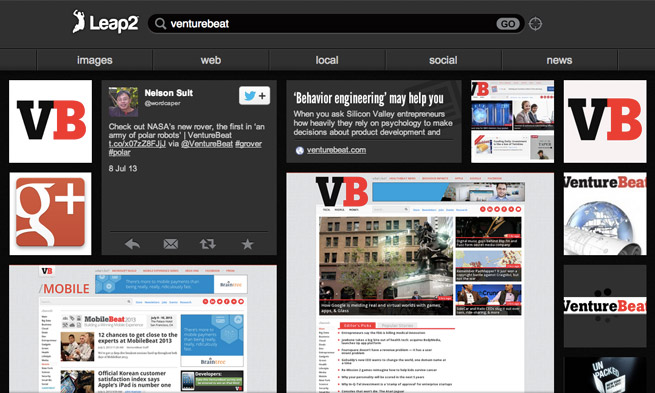 Above: Leap2 search results in the desktop browser.

The engaging visual approach to search is one way Leap2 thinks it can make a mark in this sector. Another big goal is delivering real-time and social search like no one else. With Google not delivering Twitter results like it used to, Leap2 thinks it has an edge.

“My father would never look at or use Twitter,” Leap2 CEO Mike Farmer said. “But we did a search for ‘Lake Wilson fishing,’ and there was a tweet that said, ‘If you want to catch walleye, you need to be fishing at 60 feet of water.’ For him, it’s highly relevant. That’s what you get with Twitter [results].”

Another way Leap2 thinks it will stand out from the pack? Being the search engine of choice for a younger generation that eschews brands that are too big. With teens using Snapchat more than they use Facebook, why not encourage them to try Leap2 instead of Google or Bing?

“The younger generations don’t have the same kind of loyalty we have,” VanWinkle said. “They haven’t been using Google for 15 years. They’re not loyal, frankly. They want something different. They expect it to be dressed, sassy, sexy, bundled up, and highly consumable.”

Farmer said that the company’s has a lot to deal with for the near future. It has plans to add advertising to generate revenue, refine the desktop and mobile products further, develop for new platforms including TV, and potentially raise more funding.

“We’ve started to meet with a few folks and Series A [funding] is right around the corner,” Farmer said.

Soon, the company will also do something “significant” by further combining search and social results. Farmer kept details close to the chest, but hinted a little at what was coming.

“We’re combining [social and search] in a very significant update,” Farmer said. “We will bring social engagement to search.”