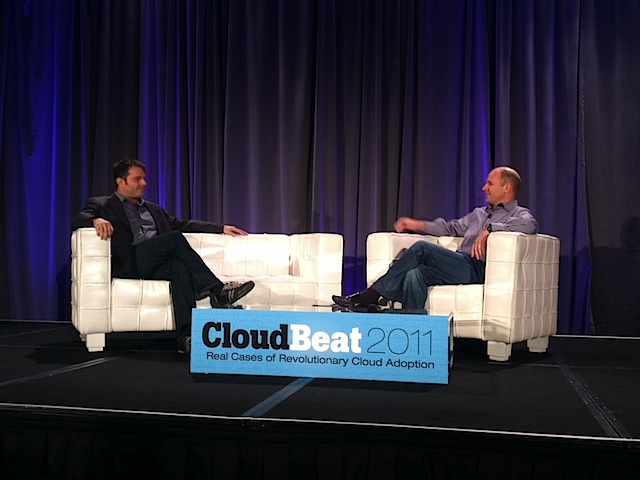 There are actual people behind the cloud, and with people come salaries, and with salaries can come overhead. Lewis Cirne, chief executive officer of New Relic believes he’s found the way to cut the fat.

“You shouldn’t accept a vendor that says ‘we’re going to lock you in based on what we sold you ten years ago,'” said Cirne at VentureBeat’s CloudBeat 2011 conference, “The onus is on us.”

This “onus” is, at its simplest, a responsibility to make the best products you can. It’s a mantra you’ll hear high and low, but for Cirne, this is truly how to create a tight and lean company: build a product that sells itself. The natural progression to the cloud that we are currently experiencing lends itself heavily to a self-marketing product.

New Relic is a SaaS, or software as a service, company, which monitors web application traffic to measure speed and identify bottlenecks. It can then relay those bottlenecks and speed issues to the client and suggest fixes to the problem. Prior to creating New Relic, Cirne founded Wily, a company which served a similar purpose but existed as physical software as opposed to cloud software. After Wily was purchased by Computer Associates International Inc. in 2006, Cirne realized he had about 260 employees, only 50 of which actually developed the software.

This was a pivotal moment for Cirne, now armed with the understanding that three quarters of his staff were going toward selling a product that he believed should have just sold itself.

That first minute is when you need to “wow” the customer, and if that minute doesn’t take your customer captive, they’re headed off to the next option. What also helps the $2000 minute is the expectation that you’re not going to have to spend as much in the checkout line. The nature of the cloud allows customers to ease themselves into software that, only a few years ago, would have required the rigamarole of sales pitches, installation and clean up.

Cirne explained that an unnamed telecommunications company started out with only a few servers to run New Relic’s application monitor, and as its needs grew, it easily added the software to more servers on its own. The hand holding has been removed in favor of a self sufficient consumer, which doesn’t need convincing from a marketing team.

You want to create something your customers are going to want to tweet about, explained Cirne. “That’s your measure of success.”