Zendesk is hoping to expand its global footprint with a new office in São Paulo, Brazil, its first in South America.

The San Francisco-based customer-service software company has been growing quickly in recent years, and it’s a contender for a strong initial public offering. To prepare for the Street, the company is eying new revenue opportunities overseas. 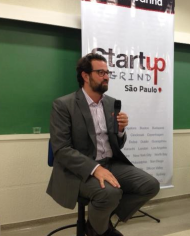 Zendesk already has 1,000 Brazil-based customers using its software, so the decision to open a new office and launch a custom Portuguese website was a no-brainer, according to vice president of marketing JD Peterson. In an interview, Peterson told me that Zendesk has not made a concerted push in Brazil but has experienced growth by word of mouth since 2009, when it landed its first customer in the region.

By phone, Peterson said that more than 50 percent of Zendesk’s customers are based abroad. “We see this extension as part of our continuing growth,” he said. This Brazil office is its ninth outside of the U.S.

Peterson said that Zendesk will not face strong competition from domestic companies in Brazil. However, it will continue to fight against the large and entrenched customer relationship management (CRM) players, like Salesforce.com.

Above: The Zendesk brand mascot, a laughing buddha named “Buddhy.”

Bay Area companies are increasingly on the hunt for opportunities in China, India, Russia, and Brazil. According to consulting firm McKinsey & Co., 70 percent of Internet users will live in these emerging markets by 2015. As Lumia Capital investor Zach Finkelstein recently put it, a global perspective is now a “requirement” for Silicon Valley’s Internet businesses.

Zendesk was founded in 2007 by Danish entrepreneurs Mikkel Svane, Alexander Aghassipour, and Morten Primdahl. The goal was to develop simple software tools to help companies improve their customer service. It has subsequently grown to over 30,000 customers and hundreds of employees.

Zendesk has raised over $80 million in venture funding, netting a massive $60 million in September, 2012.