Microsoft has detailed more features of its SkyDrive cloud storage system inside the upcoming Windows 8.1 operating system update, and a few of them are pretty awesome.

With deepening SkyDrive support directly inside Windows 8.1 and boosting its feature set, it looks like Microsoft is doing its best to make SkyDrive a major selling point in Windows 8.1.

The first major feature update for SkyDrive in 8.1 is something Microsoft calls “placeholder files.” Basically, if you use SkyDrive for cloud storage of your files and photos, you can now access your files inside 8.1 without the files actually being in the folder. Instead, data about your files, including thumbnail info, represents the file in the folder without the whole thing being downloaded.

Ideally, the option of using placeholder files gives you the freedom to store a lot inside SkyDrive without everything being synced on the corresponding folder on your computer. But you still get easy access to those files and know what files are sitting in SkyDrive.

One scenario where placeholder files is ideal is looking at photos. Microsoft writes:

For photos, flipping through lots of pictures in one go is a common scenario. We wanted to give you fast scrolling of photos without taking up a lot of local disk space. So we’re doing something even more special there. When you flip through photos, we download large thumbnail images instead of the actual files. And we pre-fetch thumbnails to enable fast scrolling. It’s only when you want to edit a photo that we download the full file to the local disk.

Another handy feature in SkyDrive in 8.1 is offline access to files. If you go into SkyDrive and mark a file or folder for offline access, it will be there for you to work with. And because SkyDrive is so deeply connected with 8.1, the changes you make are automatically synchronized as soon as you are back online.

Microsoft makes it easy to tell which files are offline-ready and not: 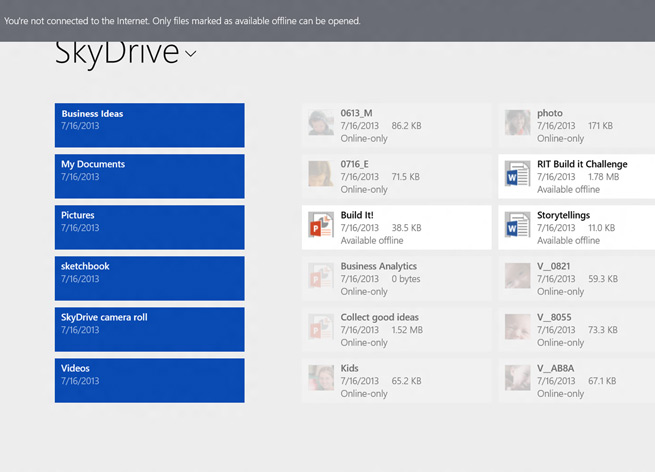 All of these enhancements will make SkyDrive a more formidable opponent to Dropbox, Google Drive, SugarSync, and other cloud-storage services.