Cloud gaming’s second coming has been a big topic ever since Google announced its Stadia game streaming service will be coming this year. And a new report by research firm Technalysis Research suggests that gamers are willing to give cloud gaming a try if it means they can play their games across multiple devices.

Technalysis did a survey of more than 2,000 gamers in the U.S. and China, and it found higher interest in cloud-based game streaming based on the current usage of multiple devices for gaming, the desire for multi-platform games, and users’ professed interest in game streaming and their willingness to pay a reasonable sum for it.

“If executed properly (and that is, of course, critical), then the likelihood for success is high for Stadia given this data,” said Bob O’Donnell, analyst and president of Technalysis, in an email. 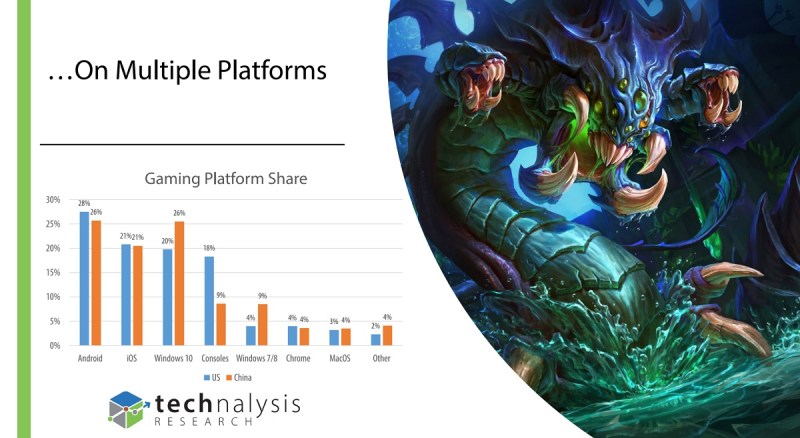 Above: Gamers played on a variety of platforms.

But he didn’t think Apple has the same chance for success with its Apple Arcade subscription service coming this fall, as it is limited to playing on Apple TV, iPads, iPhones, and Macs.

“As for Apple Arcade, while I think some people will find it very interesting, the lack of support for other platforms and the more niche, ‘artistic’ type games that it seems Apple will be putting there will limit its success,” O’Donnell said.

O’Donnell said that the influence and impact of digital gaming continues to grow at an impressive rate around the world, with U.S. gamers spending nearly 65 hours a week, and $2,580 per year on gaming across an average of 4.4 devices.

Chinese gamers who participated in the study reported about 47 gaming hours a week, expenses of $1,453 per year on games, in-game purchases and gaming hardware, and an average of 4.1 devices on which they game.

The study is based on an online survey conducted from December 2018 through February 2019 of 2,022 consumers (1,011 each from the U.S. and China) who gamed at least two hours per week. The goal of the study was to understand what type of devices people game on, the hours they spend on them, the types of games they play, the amount of money they spend, their experience with augmented reality and virtual reality gaming devices, their involvement with creating and viewing game content, participation in gaming competitions, interest in esports, desire for cloud-based game streaming, and more.

“What becomes abundantly clear from the data is that people are regularly using multiple devices to game,” said O’Donnell, author of the report. “The notion of a single primary or even preferred gaming device, platform, or even form factor just doesn’t hold up anymore because of the large amount of time people spend gaming on multiple devices.”

The study found, for example, that while Android phones are the most commonly owned individual device used for gaming and the device upon which people spend the most time gaming (both in the US and China), collectively, PCs are still the form factor where people spend more of their total gaming time. 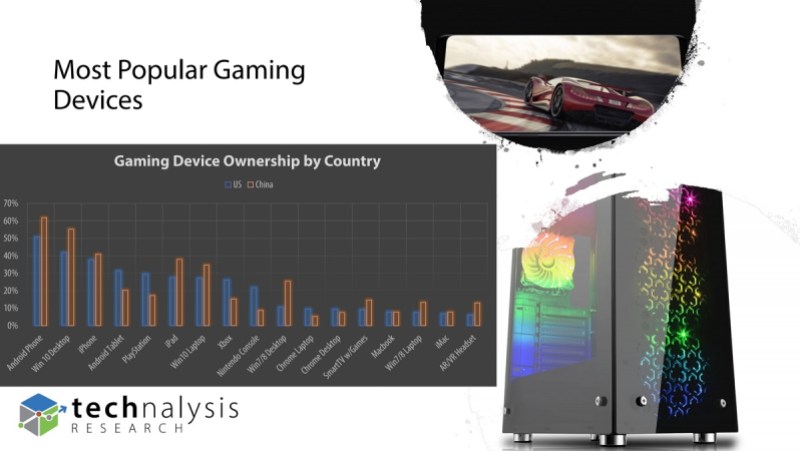 Above: The platforms that people play games on in the U.S. and China.

These trends also potentially set the stage for strong pent-up interest in cloud-based game streaming services, which several major tech vendors are expected to announce and bring to market this year. In the U.S., over 76% and in China nearly 85% of gamers were either somewhat or very interested in such a service. Plus, they reported a strong willingness to pay: on average $16.19 a month in the U.S. and the equivalent of $18.80 per month in China.

The study also found a lot of interest in and impact from gaming-related content. On top of their gaming time, U.S. respondents reported an average of 11 hours per week watching Twitch and gaming content from YouTube, while Chinese respondents averaged 10 hours per week viewing Douyu and Youku Tudou (their Chinese equivalents).

In addition, this viewing time inspired just under 50% of U.S. gamers and 60% of Chinese gamers to create their own content, by either livestreaming their own gaming sessions or recording and uploading them.

“The gaming ecosystem has expanded well beyond the games themselves into a variety of wildly popular activities, such as eSports and other gaming competitions,” said O’Donnell. “These in turn impact people’s interest in and desire to spend more time and money on their own gaming, creating a type of ‘virtuous circle’ of market demand, and increasing the level of influence that gaming has begun to have on our overall culture.”

He also said the No. 1 individual device in terms of time spent gaming is Android phones, but overall, PCs are the top platform (though just barely in the U.S. — nearly tied with smartphones overall). Windows 10 desktops are the second most commonly owned gaming device and second in terms overall time spent in China, but iPhone is the second most popular in terms of time spent in the U.S. (and Windows 10 desktops are very close behind).

The U.S. and China have flipped in one respect. Chinese gamers are more focused on PC gaming (the consoles were banned for many years in China) and they are much more focused on graphics processing units (GPUs) and graphics capabilities. In the past, China’s gamers played on low-end computers. But not anymore.

Overall, O’Donnell said the game market continues to be robust across multiple platforms and devices, with the time and money spent on gaming by gamers dwarfing most other consumer activities.