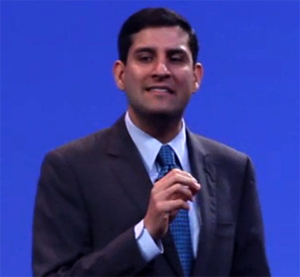 Kundra made headlines as the federal government’s first-ever CIO when he was hired by the Obama administration in March 2009. While in his job, Kundra managed $80 billion in technology investments and instituted a 25-point plan to reform and restructure the government’s IT management. Kundra left his job in August to become a joint fellow at Harvard University’s John F. Kennedy School of Government and the Berkman Center for Internet and Society.

The move to Salesforce as an EVP for emerging markets makes sense for Kundra. Ideally, his time with the federal government will have prepared him to talk up Salesforce’s cloud initiatives throughout the world.

“Vivek Kundra is an amazing technology visionary who opened the eyes of millions to the transformational power of cloud computing,” said Salesforce CEO Marc Benioff, in a statement. “His disruptive leadership is just what the industry needs to accelerate the social enterprise.”

Before serving as federal CIO, Kundra was the chief technology officer for the District of Columbia and the assistant secretary of commerce and technology for the state of Virginia.