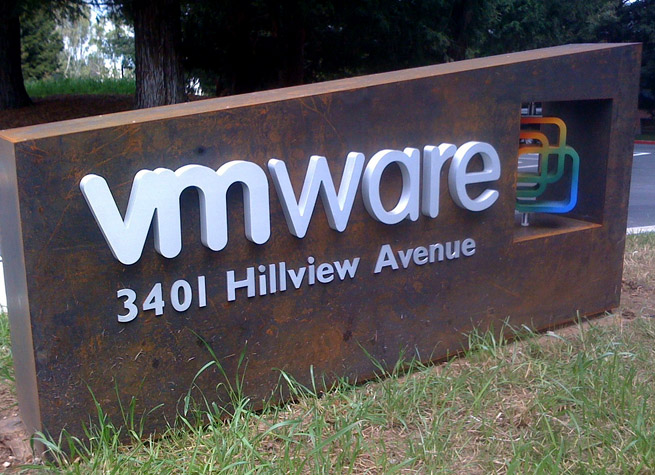 VMware picked an unusually busy day (new pope, new Android head, new Kickstarter record) to dump a lot of high-level cloud announcements in the laps of tech reporters everywhere. The company has some big things in the works, including an upcoming public cloud that will challenge Amazon and a new focus on software-defined data centers.

Let’s dig into the news dump.

Public cloud to take on Amazon and Rackspace

First up, VMware vaguely announced that it will be offering a stand-alone public cloud from its newly formed “Hybrid Cloud Services” business unit. This public cloud will challenge all the big dogs offering infrastrcture-as-a-service — Amazon, Rackspace, IBM, HP, SoftLayer, Google, Microsoft, and more — and it will launch in the second quarter of 2013.

Forrester analyst James Staten, who was pre-briefed on the announcement, writes about the decision in a blog post:

Sometimes you can only coax a reluctant partner and I&O customer community for so long before you feel you have to take matters into your own hands. That is exactly what VMware has decided to do, to become relevant in the cloud platforms space. The hypervisor pioneer unveiled vCloud Hybrid Service to investors today in what is more a statement of intention than a true unveiling.

VMware’s public cloud service – yep, a full public IaaS cloud meant to compete with Amazon Web Service, IBM SmartCloud Enterprise, HP Cloud, Rackspace and others – won’t be fully unveiled until Q2 2013, so much of the details about the service remain under wraps. VMware hired the former president for Savvis Cloud, Bill Fathers, to run this new offering and said it was a top three initiative for the company and thus would be getting, “the level of investment appropriate to that priority and to capitalize on a $14B market opportunity,” according to Matthew Lodge, VP of Cloud Services Product Marketing and Management for VMware who spoke to us Tuesday about the pending announcement.

VMware said its public cloud will be aimed at its existing customer base and sold through its existing VAR and SI channel. This explains CEO Gelsinger’s strong comments from last month’s Partner Exchange — it wasn’t public clouds he was worried about but non-VMware public clouds. But for this channel fulfillment strategy to come true, its partners will have to get with the cloud program too and like the I&O clients they serve, many don’t see more revenue at the end of the public cloud rainbow. And most channel partners don’t have the skills or the trust level to help their I&O clients transition from static virtualization to cloud – that’s a culture and career path change more than a product they can sell them. This requires consulting skills and real cloud experience and most VMware partners don’t have either. 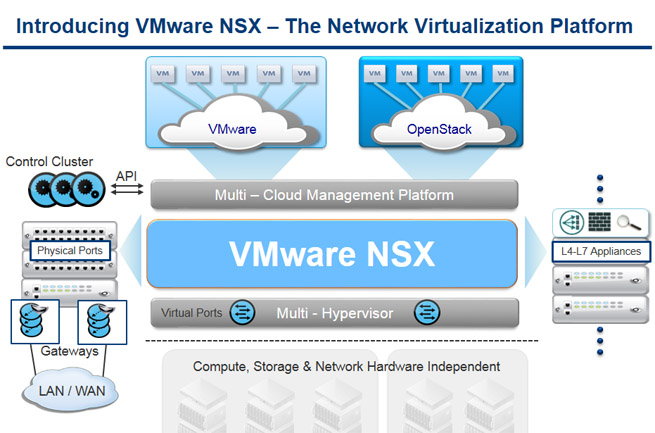 VMware also said today that it will merge its “VMware vCloud Networking and Security” product line with the “Nicira Network Virtualization Platform (NVP)” into one product family called “VMware NSX.” VMware paid more than $1 billion to buy Nicira in July 2012 for its software-defined networking potential, so here we are seeing that move in action.

There is some skepticism that software-defined data centers are overhyped, but we’re willing to let VMware put itself out there and see what it is able to do on this front.

The company explained the decision in this excerpt from a lengthy blog post:

VMware NSX will be the world’s leading network and security virtualization platform providing a full-service, programmatic, and mobile virtual network for virtual machines, deployed on top of any general purpose IP network hardware. The VMware NSX platform brings together the best of Nicira NVP and VMware vCloud Network and Security (vCNS) into one unified platform. VMware NSX exposes a complete suite of simplified logical networking elements and services including logical switches, routers, firewalls, load balancers, VPN, QoS, monitoring, and security; arranged in any topology with isolation and multi-tenancy through programmable APIs – deployed on top of any physical IP network fabric, resident with any compute hypervisor, connecting to any external network, and consumed by any cloud management platform (e.g. vCloud, OpenStack, CloudStack).

The Pivotal Initiative is a go

Finally, the VMware and EMC spin-off The Pivotal Initiative has become official.

The Pivotal Initiative is led by former VMware CEO Paul Maritz. It is 69 percent owned by EMC and 31 percent owned by VMware and focuses on “big data” and data processing initiatives. The new company has employees and technology from EMC’s Pivotal Labs and Greenplum units and from VMware’s Cloud Foundry, Spring, and Cetas.

EMC CEO and Chairman Joe Tucci believes The Pivotal Initiative will go public in the future, and Martiz has stated it will likely be a $1 billion business in five years.