Amazon’s announcement last September that it was opening an application process to determine which city would house its new secondary headquarters led to a clamor of activity from local governments across the country. Today, Amazon revealed it has whittled the candidates down from 238 to just 20.

Although Amazon was open to proposals from across North America, it seemed likely the company’s HQ2 would be in the U.S. — and this still appears to be the case. While applications flew in from Canada and Mexico, of the 20 potential bases for HQ2, 19 are in the U.S. The other is Toronto, Canada.

What’s immediately striking about this list is that nearly every candidate is a major conurbation, which suggests that the smaller cities vying for Amazon’s lucrative employment footprint may never have been serious contenders. That said, the smaller regions that did make the cut are now within arm’s reach of the HQ2 contract, including Maryland’s Montgomery County, which claims a population of around 1 million, and Raleigh, North Carolina, with a population of just half a million.

“Getting from 238 to 20 was very tough — all the proposals showed tremendous enthusiasm and creativity,” noted Holly Sullivan, from Amazon Public Policy. “Through this process, we learned about many new communities across North America that we will consider as locations for future infrastructure investment and job creation.”

It’s also worth noting here that the candidate locations are heavily weighted toward the eastern side of the U.S., which would open Amazon’s potential hiring pool considerably. 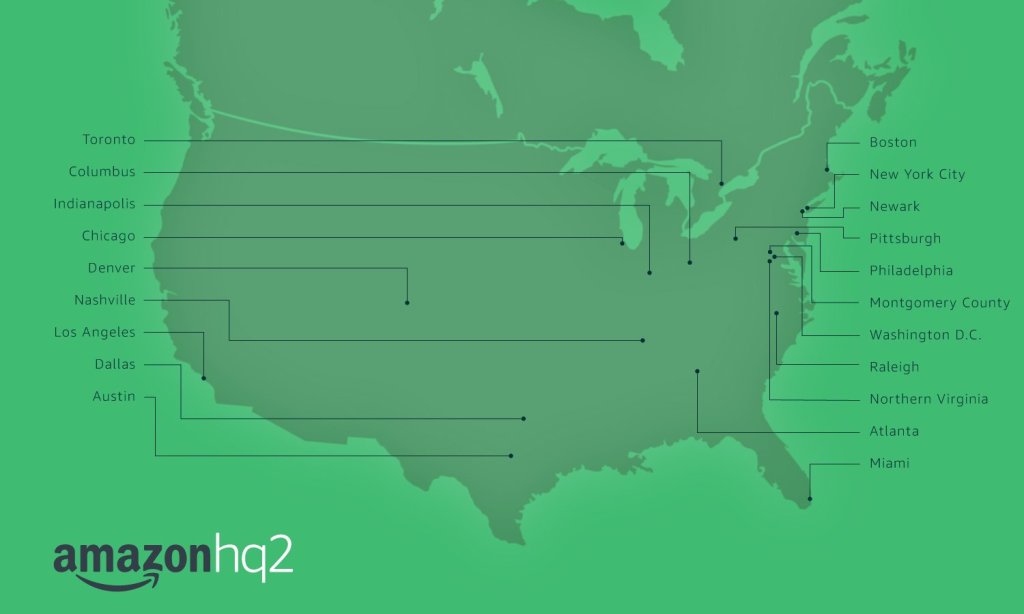 Amazon previously stated that the new HQ2 facility won’t be some sort of satellite office — the plan is for it to be on par with the existing Seattle hub.

“We expect HQ2 to be a full equal to our Seattle headquarters,” Amazon founder and CEO Jeff Bezos said at the time.

The company has said that it’s allocating around $5 billion for construction and that the new premises should be able to facilitate 50,000 people. The big selling point from a staffing perspective is that existing or prospective employees who perhaps don’t wish to live in Seattle — or can’t afford to — will have options. As for the winning bid — its authors will gain rights to brag about how they’re boosting their local economy.

“Amazon HQ2 will bring billions of dollars in up-front and ongoing investments, and tens of thousands of high-paying jobs,” Bezos promised.

Moving forward, Amazon said it plans to work with each of the candidate locations to “dive deeper into their proposals, request additional information, and evaluate the feasibility of a future partnership.” The company confirmed that it expects to make a final decision later in 2018.