After two invitation-only beta testing periods, Apple today officially launched the Apple Card to potential customers in the United States. The credit card is a joint offering between Apple and Goldman Sachs and is being widely offered to consumers with various income levels and credit histories, albeit with some caveats.

Apple Card is issued in two forms: a digital card accessible through the iPhone or iPad and a physical card made from titanium that can be used in stores with either a chip or magnetic stripe. The cards have no visible credit card numbers and conduct transactions securely over MasterCard’s merchant network. Each physical card is paired with a single iPhone user’s account, and as of now there are no joint cards for married couples; each user must apply for an individual account and card.

U.S. users interested in applying for the Apple Card need only open Apple’s Wallet app on the iPhone or the Wallet & Apple Pay menu under an iPad’s Settings screen, each under iOS 12.4 or later. Choosing “Add Card” will bring up a menu to apply for an Apple Card or add other cards manually. Applications typically take under a minute to be approved or rejected, with the former resulting in an offer of terms — including an interest rate ranging from 12.99% to 23.99%, and a credit limit most commonly in the $250 to $7,500 range. 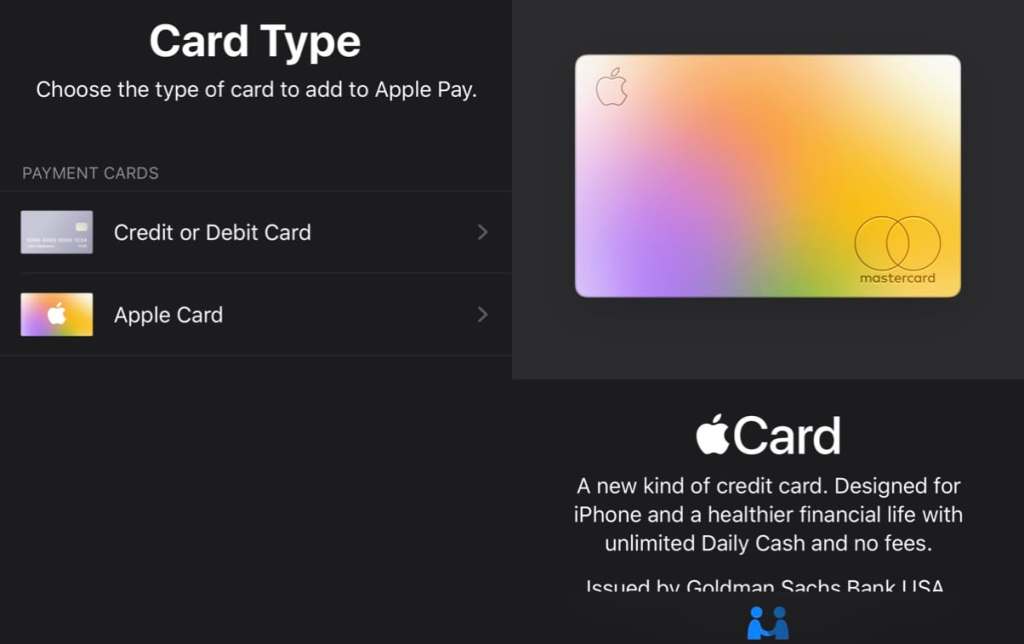 Few details regarding the card came out during the first beta testing period with employees, but Goldman Sachs’ approval and denial policies became clearer during the invite-only public preview period. While applicants can successfully receive cards with relatively small amounts of income and limited past credit histories, Goldman is commonly rejecting applicants based on TransUnion reports of previous past due balances, bankruptcy filings, and other issues, regardless of higher current income or credit scores.

The card’s primary benefit is Daily Cash, a 3% return of funds spent on Apple purchases, 2% return on all purchases using Apple Pay, and 1% for physical Apple Card purchases. Apple now says it will be offering the 3% rate for Uber and Uber Eats, as well, with plans “to add more popular merchants and apps in the coming months.” Aggressive credit card deal hunters have noted that Apple’s rewards are fairly unimpressive compared with the best cash back credit cards and say customers can save more than 3% even on Apple products by shopping at merchants other than Apple.

That said, the Apple Card promises no fees — such as late fees, international fees, or others — leaving interest as its only drain on users’ wallets and includes app-based support for managing revolving credit and ongoing payments. Apple also promises a high level of user privacy, including no knowledge of where a customer has shopped, what they’ve bought, or how much they paid. While Goldman Sachs will have access to that information, Apple says it “will never share or sell data to third parties for marketing and advertising.”