(Reuters) — Bitcoin soared to its highest in almost five months on Tuesday, pulling smaller cryptocurrencies up with it, after a major order by an anonymous buyer set off a frenzy of computer-driven trading, analysts said.

The original cryptocurrency soared as much as 20 percent in Asian trading, breaking $5,000 for the first time since mid-November. By mid-afternoon, it had settled around $4,800, still up 16 percent in its biggest one-day gain since April last year.

Bitcoin surged to near $20,000 in late 2017, the peak of a bubble driven by retail investors. But last year prices collapsed by three-quarters, with trading dominated by smaller hedge funds and crypto-related firms.

“There has been a single order that has been algorithmically-managed across these three venues, of around 20,000 BTC,” he said.

“If you look at the volumes on each of those three exchanges – there were in-concert, synchronized, units of volume of around 7,000 BTC in an hour”.

Still, analysts could not point to any specific developments that could explain the mystery buyer’s big order.

Cryptocurrency markets had until today seen a period of relative calm through the year, with bitcoin trading around $3,300 and $4,200.

Big institutional investors have largely stayed on the sidelines. Concern over security breaches and regulatory uncertainty were cited as reasons for the lack of mainstream enthusiasm in digital coins.

CME Group continues to list its futures product, which launched soon after Cboe. 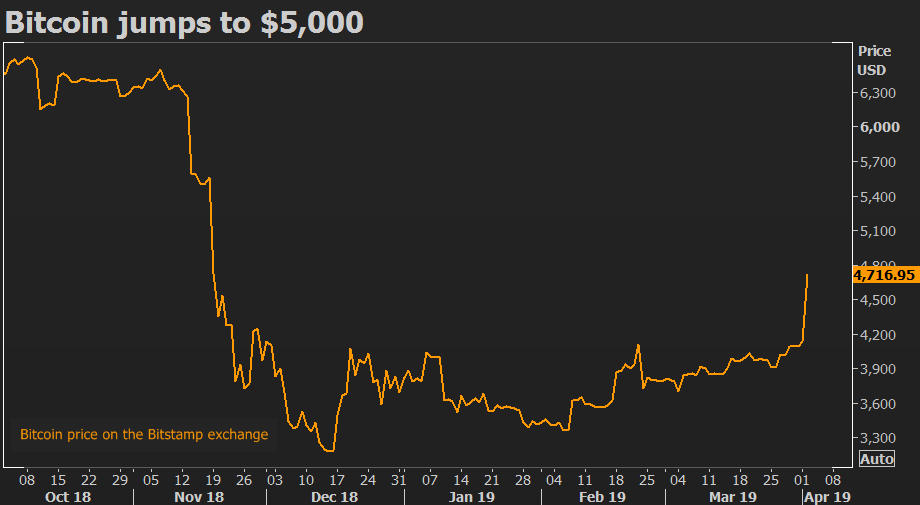 Price moves of smaller coins tend to be correlated to bitcoin, which still accounts for just over half of the value of the cryptocurrency market.

“Usually bitcoin is the leader of the market and altcoins tend to follow, as far as direction and sentiment is concerned,” said Mati Greenspan, an analyst at eToro in Israel. “Today bitcoin is in the driving seat.”