The list of top crowdfunding campaigns is becoming increasingly blockchain dominated as of late.

As a quick refresher, the concept and structure of a “blockchain” was first introduced to the world in the bitcoin whitepaper in 2008, written under the pseudonym Satoshi Nakamoto.

Generally, a blockchain is a public, distributed database of time-stamped “blocks” of transactions (including various data) on its network. With this series of blocks, anyone can view the entire history of transactions across the ledger and come to consensus on its current state.

The design of Satoshi’s open-source bitcoin blockchain inspired many to contribute to the bitcoin codebase  —  and many to start working on their own extensions of the software.

A few years later, Ethereum, a new blockchain structure, was introduced. The Ethereum blockchain was designed “with a built-in fully fledged Turing-complete programming language,” allowing users to code custom “smart contracts” into its blockchain. Thus, Ethereum functions as something of a distributed computer running diverse programs and applications continuously worldwide (including those “that have nothing to do with money at all”).

And it’s Ethereum’s launch that seems to have sparked the uptick in big blockchain crowdfunding campaigns, since without  Ethereum’s own crowdfunded launch of its “decentralized app platform,”  the next four blockchain companies listed wouldn’t even exist. 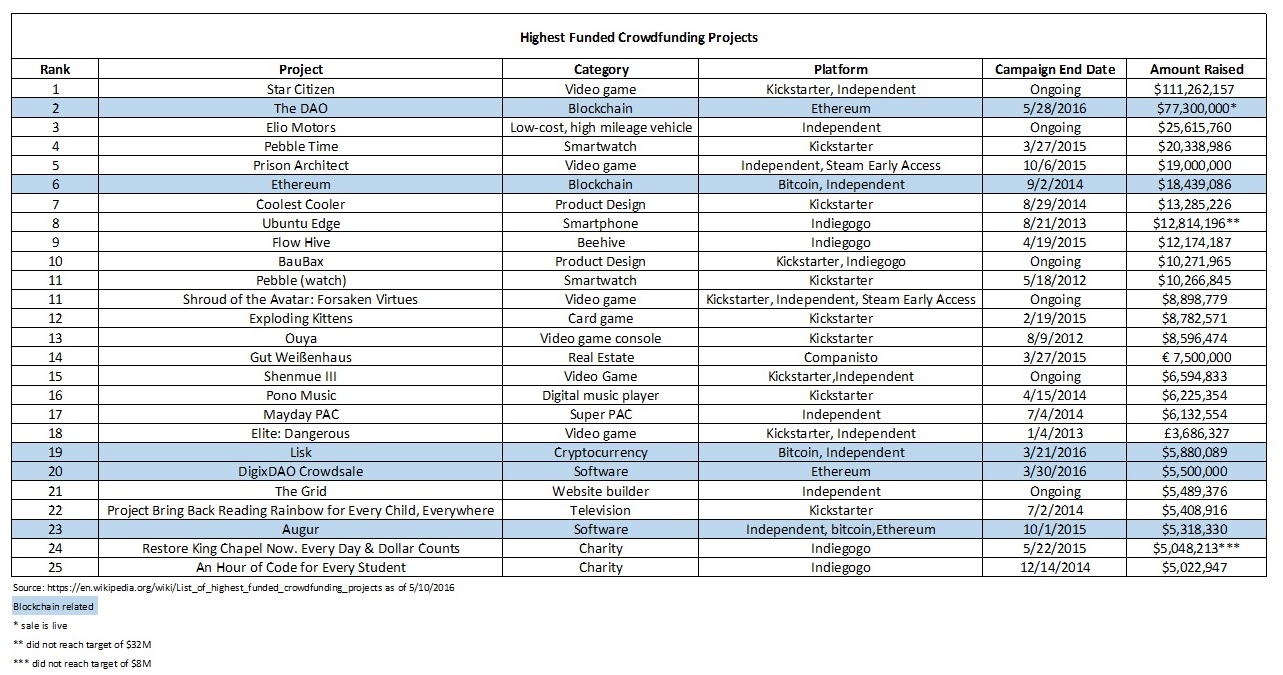 Now, let’s take a look at each of the individual blockchain ventures that have ranked in the top 25 of crowdfunding campaigns.

Ethereum’s crowdsale was conducted via the sale of Ether (ETH),  the underlying token used to operate the Ethereum platform . Ether is  the “fuel” for the decentralized super computer — the currency used to pay for computation (whether that be app-building or interacting with “smart contracts”)  on the Ethereum network.

Augur offers a prediction market platform and “future of forecasting” on real world events. It allows users to place custom bets and trade real money worldwide by taking advantage of Ethereum’s decentralized infrastructure (the code resides in the Ethereum blockchain, so nobody can “shut it off”), as opposed to traditional products that may be subject to various legal and regulatory constraints in certain jurisdictions.

A decentralized app platform (similar to Ethereum), except “written in JavaScript and running on Sidechains,” Lisk allows a user to “code, deploy, and use” their own decentralized applications in a “simple, fast, and secure” fashion on the Lisk network. Lisk touts its network’s “familiar working environment (using Node.js)”, “rich toolset”, and “easy to use APIs”. Core to Lisk’s success will be the quality of apps built upon it and its general userbase.

The DAO is a flexible decentralized autonomous organization (DAO) “leveraging the wisdom of the crowds to benefit the DAO Token Holders.” The organization is structured as a series of smart contracts granting token holders voting rights (somewhat similar to more traditional corporate equity) and “control” over their proportion of invested ETH. The DAO’s infrastructure enables voting on any sort of expenditure the organization could make (such as hiring and paying contractors to work on their proposals, investing the ETH fund into another asset, and even “splitting” the DAO).

As you can see, many of the latest blockchain related projects are not only disrupting existing business models and industries but are completely redefining the standard structures behind fundraising and corporate governance.

Disclaimer: All viewpoints are completely my own. Nothing presented represents the viewpoints, opinions, etc. of any corporation or organization and all data/charts/analyses are for illustrative and discussion purposes only and should not be construed or interpreted as fact, advice, recommendation, or anything of similar nature.

Alex Sunnarborg is CFO and cofounder of Lawnmower.io, a mobile app for investing in bitcoin and blockchain technologies. Previously, he was a municipal investment banking analyst at Raymond James, and prior to that, he worked in wealth management.