Imagine a world where consumers buy their groceries directly from manufacturers, cutting grocery stores and supermarkets completely out of the equation. That’s a future that blockchain startup INS wants to enable. And the company has just raised roughly $43 million (60,000 Ether) in a public token sale to make it happen.

INS says seven of the top-20 fast-moving consumer goods companies in the world have shown significant interest in the platform; it cites Unilever and Mars as two examples. Beyond the top-20, the company has also “gained a total of 500 manufacturers interested in listing or having signed memoranda of understanding expressing their strong commitment to the project once it goes fully operational,” a company spokesperson told VentureBeat.

“The grocery industry in its current shape is inefficient and controlled by retailers. For example, in the U.K. there are over 7,000 manufacturers and 25 million households dependent on four key grocery retailers controlling 76 percent of the market. INS will adopt blockchain to cut the middleman – wholesalers and retail stores – to help consumers save up to 30 percent on grocery shopping,” the company said in a statement.

Any manufacturer will be able to list and sell products in the “INS Ecosystem,” giving them complete control over product pricing, the company said. Manufacturers will also be able to use the platform to get customer feedback and provide promotions to loyal customers. Smart contracts on the blockchain will enable these direct sales. 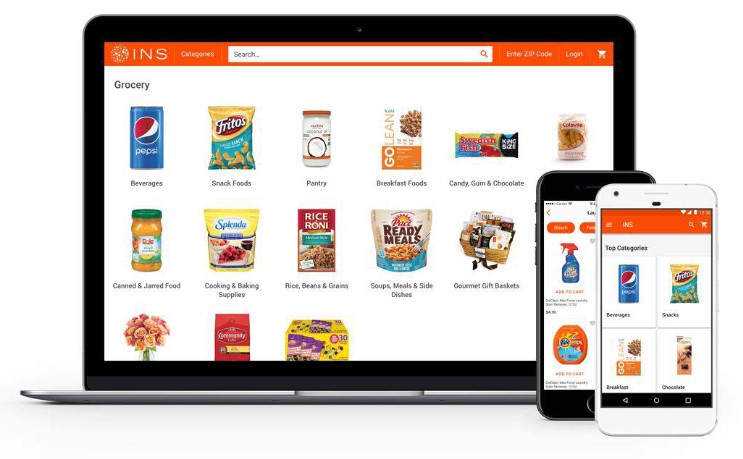 The Moscow-based startup plans to launch internationally by the end of 2018, beginning in the largest EU, U.S., and Eastern European cities. But development appears to be in the early stages. INS has not yet announced which blockchain it will be running on, for example. (It requires high availability, a property it notes Ethereum isn’t currently able to offer due to its slow transaction speeds.) However, it is in the final stages of negotiations with a “full range blockchain service company,” according to a company spokesperson. With an alpha launch planned for Q3 2018, it’s hard to imagine a full operational rollout by Q4.

Like Instamart, INS plans to operate its own fulfillment centers to stock groceries. A network of independent couriers and courier companies will handle delivery.

You can see a mock-up of the planned service here and you can view its fulfillment app mock-up here.

Collinstar Capital and Blockchain Ventures have invested in INS. And the startup has partnered with Bancor to provide easy exchange and liquidity options to the INS token.