CryptoKitties became a sensation after it debuted in November as a collectible game built on top of blockchain and the Ethereum cryptocurrency. Now the Axiom Zen game studio is announcing that it’s launching CryptoKitties in China, Taiwan, and Hong Kong.

CryptoKitties don’t come with a cryptocurrency themselves. Rather, the company calls them cryptocollectibles, which use blockchain technology to authenticate ownership of a particular CryptoKittie character. Players can buy and sell those characters, and some of them are rare. You can think of CryptoKitties as a kind of Pokémon for the age of blockchain.

Since its launch, CryptoKitties has gained more than 1.5 million users. This doesn’t sound like a lot, but the studio says fans have conducted more than $40 million in transactions. And some of the game’s most popular cats have sold for the equivalent of more than $200,000. CryptoKitties got so popular that they accounted for as much as 30 percent of the volume of trading in Ethereum, one of the more popular cryptocurrencies.

CryptoKitties isn’t much when it comes to gameplay. You can buy a kitten (with Ethereum) and hold on to it. You can breed kittens, which have different visual features, dubbed traits. Some of the traits are more rare than others. There are thousands of kittens in the game. Some of them breed fast, some slow. CryptoKittydex keeps track of trains and how common or rare they are.

In January, Axiom Zen partnered with Garfield developer Animoca Brands to publish CryptoKitties on mobile in China, Hong Kong, and Taiwan. The company is launching in China with localized web site and support. Axiom Zen is also launching an iOS beta app in the region, limited to just 5,000 users.

It might be odd for China to ban cryptocurrencies but to permit trading to happen for cryptocollectibles. But Axiom Zen sees CryptoKitties as one more sign that games are always at the forefront of emerging technologies and platforms. The company said that “digital scarcity and true ownership unlock billions of dollars of value and put power in the hands of creators and their fans.” 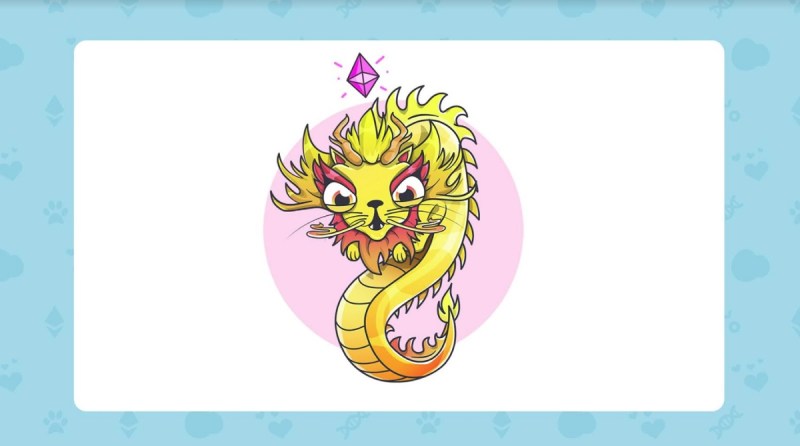 Above: CryptoKitties will have special cats from artist Momo Wang.

China has banned cryptocurrency trading, but Canada-based Axiom Zen said that regulators are OK with the game thanks to the distinction that it is dubbed a cryptocollectible.

In an email, CryptoKitties cofounder Bryce Bladon said, “CryptoKitties are not cryptocurrency, and local regulators have confirmed that they are not classified as a security.”

Above: CryptoKitties will soon have a more Asian flavor, thanks to Momo Wang.

Axiom Zen has also appointed Tuzki creator Momo Wang, an illustrator in Beijing, as brand ambassador and the first contributor to the CryptoKitties Artist Series. Wang’s Tuzki is a popular character with more than 40 million interactions per day on social media. The Artist Series will offer special edition digital cats, designed by prominent artists, influencers, and designers. A series of unique and limited-edition “fancy” cats designed by Momo Wang will be available globally.

One of the cats will be the subject of a global auction that represents one of the first examples of an internationally recognized artist auctioning ownership of their art via blockchain technology, underlining the technology’s potential for art and artists, as well as their fans.