If you think the sky is falling for traditional brick-and-mortar retailers, it’s understandable. There is a daily drumbeat of negative news about retailers filing for bankruptcy and closing stores, and the phrase “Retail Apocalypse” has its own Wikipedia entry. Amazon took approximately 46 percent of US ecommerce growth in 2016, according to data published by Internet Retailer. And in the first half of this year at least 17 national retail chains declared bankruptcy; Business Insider counted 29 retail chains closing over 6,300 stores.

But recent earnings reports from large brick-and-mortar retailers show their situation is far from dire and that, in fact, they’re thriving.

Let us start with online, where the U.S. Department of Commerce recently reported that total e-commerce sales in the U.S. grew 16 percent in the second quarter of 2017, the fastest pace since the third quarter of 2012. 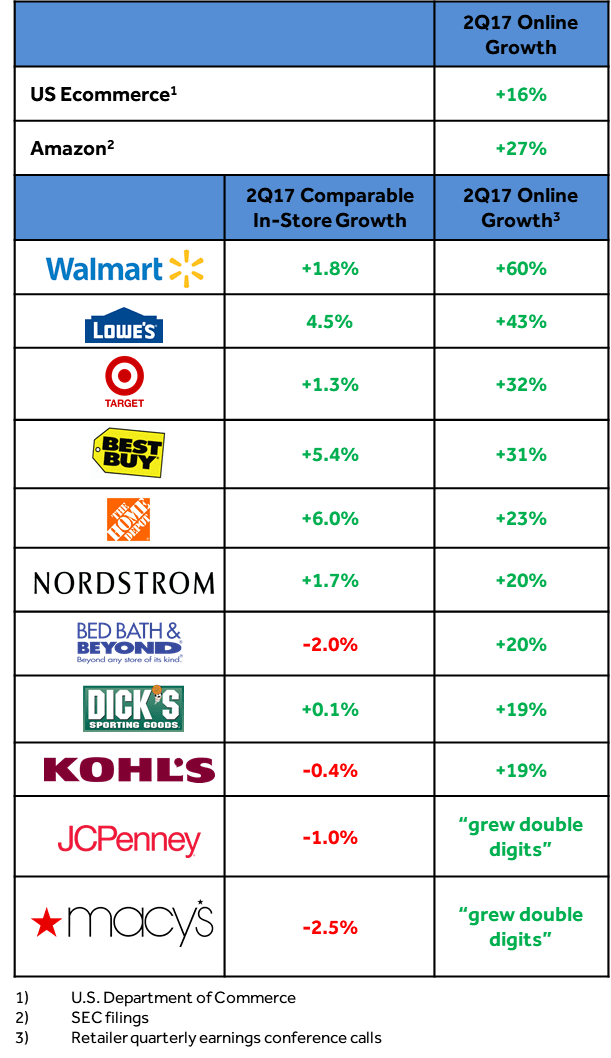 But that growth is online, where the rising tide is lifting all boats. Still, offline retail is not all carnage. Only four of the 11 retailers named above, all in the general merchandise and home category, experienced a decline in same-store-sales in the second quarter. Again, the reality is different than the “retail apocalypse” narrative so common in the general business media.

Declining same-store-sales is clearly negative, but store closings are not necessarily a cause for concern if the retailer is shifting investments into e-commerce operations. Focusing on e-commerce makes sense, because retail is shifting into the online channel, and any business should be allocating capital into sales channels that are growing. Granted, these investments have been happening for years, but according to recent earnings reports, they finally appear to be paying off.

So what tactics are traditional retailers using to grow their online businesses? The playbook appears to be similar across many of the largest brick-and-mortar retailers. First, retailers are aligning physical stores with the ecommerce channel to make shopping more convenient for consumers. Next, they are investing in private label brands that are only available through the retailer and provide real value for consumers. And finally, retailers are recognizing that the consumer is in charge and are providing a wide selection of products online to convert search and social traffic into buyers, and hopefully life-time customers.

Omni-channel investments are paying off

The CEOs of traditional retailers have been talking about omnichannel initiatives for years and have been investing significant capital to allow online orders to be shipped from stores and/or picked up by consumers in-store. These initiatives help drive consumer traffic into stores and, at least before Amazon’s Whole Foods acquisition, provided delivery options that even Amazon lacked.

Omnichannel investments are beginning to pay off, with significant unit volume now being fulfilled by stores and/or picked up in stores by consumers. In its second quarter 2017 earnings call, Target disclosed that 40 percent of its online unit volume was fulfilled from stores. By the end of 2017, Target expects to be fulfilling orders from 1,400 of its 1,800 U.S. stores.

By shipping from stores rather than from a central warehouse, retailers can cut shipping costs and times and leverage their existing manpower and storage space.

Other retailers are taking note: JCPenney plans to have all of its stores ship-from-store capable by the end of 2017, and Walmart has gone a step further by rolling out 100 fully automated towers for the easy pickup of online orders.

Private label brands have long been a strategy for retailers to create a differentiated product offering. Amazon can’t sell what it can’t source, and retailer-exclusive items are frequently sold at lower prices than the branded versions. Four of the 11 retailers we analyzed specifically mentioned private brands as growth drivers during the second quarter of 2017. Private brands have been especially successful at Target, where the Cat & Jack clothing line is a now a $2 billion annual revenue business.

Extended assortments are giving consumers what they want

Investment firm Robert W. Baird estimated in mid-2016 that between Amazon’s first-party retail operation and third-party marketplace, it was offering over 400 million products for sale. On its second quarter 2017 earnings call, Walmart disclosed it now offers 67 million products for sale online. It is no coincidence that two of the largest and fastest growing retailers online have two of the largest product assortments.

CommerceHub research estimates that, on average, increase in product assortment size accounts for approximately 70 percent of a retailer’s online gross merchandise value (“GMV”) growth. And across our network of retailers, we have observed a 12 percent increase in GMV for every 10 percent increase in the number of unique products sold.

To be clear, retailers face real challenges restructuring their businesses to succeed in a world increasingly dominated by e-commerce. But by differentiating from Amazon, offering expanded assortments enabled by innovative technologies, and using brick-and-mortar stores as delivery assets, retailers are satisfying consumers and taking their share of the growing e-commerce pie. The growth numbers are proof that there is room for more than one winner online, so don’t believe all the headlines you read.

Erik Morton is VP of Strategy and Corporate Development at CommerceHub.