The PC market is still in decline, according to research firms Gartner and IDC. That’s nothing new for the duo to agree on, but coincidentally they also (for the first time?) estimated the exact same number of PC shipments: 58.5 million in Q1 2019. Gartner and IDC also both found PC shipments were down globally year-over-year. So far, 2019 looks like more of the same.

After six years of quarterly PC shipment declines, 2018 brought a positive Q2, a flat Q3 … and then a negative Q4.

Gartner and IDC analysts have pointed to CPU shortages as contributing to this past quarter’s decline. But that just seems to be an excuse for reality: The PC simply isn’t as in-demand as it once was.

(Gartner also shares U.S.-specific figures and in Q3 2018 found that Microsoft had broken into the top 5 PC vendors. The company held onto this position in Q4 2018, and now Q1 2019. But that’s U.S.-only — Microsoft still doesn’t appear on worldwide charts.)

As you can see in the chart below, Gartner found that in the top six, only the top three saw gains in PC shipments, but these were smaller than their competitors’ losses. The rest of the market was down 20.9%, a typical sight. 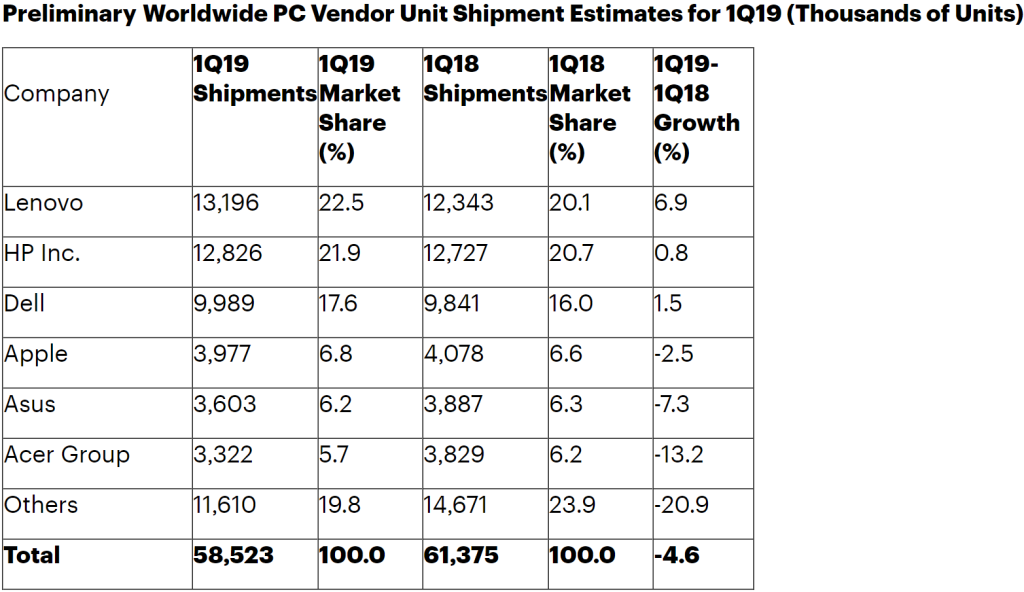 Lenovo and HP are neck and neck. HP has been largely on an upward trend, so it’s notable to see Lenovo the one gaining share. Dell’s growth has also slowed, though it remains within reach of the two leaders.

“We saw the start of a rebound in PC shipments in mid-2018, but anticipation of a disruption by CPU shortages impacted all PC markets as vendors allocated to the higher-margin business and Chromebook segment,” Gartner principal analyst Mikako Kitagawa said in a statement. “While the consumer market remained weak, the mix of product availability may have also hindered demand. In contrast, Chromebook shipments increased by double digits compared with the first quarter of 2018, despite the shortage of entry-level CPUs. Including Chromebook shipments, the total worldwide PC market decline would have been 3.5% in the first quarter of 2019.”

IDC places HP first and Lenovo second, but notes that HP shipped fewer units. That means only Lenovo and Dell saw gains, acccording to IDC. The remaining top companies were down, as was the rest of the market by 10.4%. The exact numbers, for your perusal:

“Desktop PCs were surprisingly resilient as the commercial segment helped drive a refresh during the quarter,” IDC research manager Jitesh Ubrani said in a statement. “Capitalizing on this refresh cycle, the top vendors — HP, Lenovo, and Dell — each increased their year-over-year volume and captured additional share in the desktop PC market.”