The PC market has been having a lot of trouble this year, and Q3 2015 is no exception. Both Gartner and IDC agree: PC shipments are down globally, though Apple is managing to do alright in the U.S.

As you can see in the chart below, Gartner says Dell and Apple were the only two vendors among the top six that experienced an increase in PC shipments. Acer and Asus saw particularly poor results with double-digit declines. 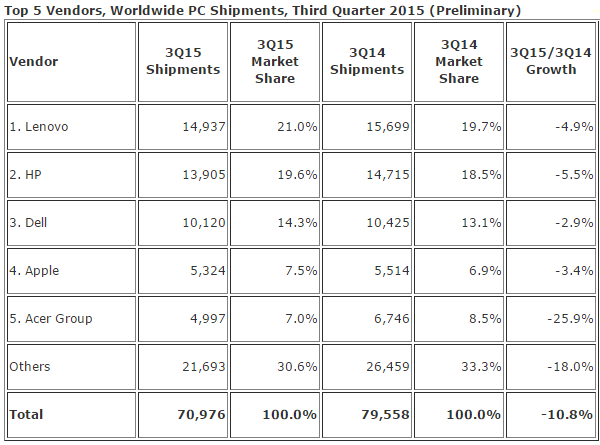 IDC agrees with Gartner that Lenovo, HP, and Acer were down, but it found that the rest dropped, as well. However, Gartner believes Apple gained globally, while IDC argues that it fell.

Yet both agree that Apple took third place in the U.S. market after gaining share, behind only HP and Dell, respectively. When it comes to computers, Apple continues to do better at home than globally.

Gartner and IDC also reached the same conclusion as to the cause of the decline this past quarter. In short, the U.S. dollar is to blame. Both are hopeful, however, that there will be a rebound.

“The global PC market has experienced price increases of around 10 percent throughout the year, due to the sharp appreciation of the U.S. dollar against local currencies,” Mikako Kitagawa, principal analyst at Gartner, said in a statement. “Soft recovery is expected to start in 4Q15, as Windows 10 product refreshes start to appear. In the meantime, PC manufacturers should adjust configurations for 2016 without the impact of price hikes seen in 2015, which will lead into more stable market conditions in the upcoming year.”

“The PC market continues to contract as expected, but we remain optimistic about future shipments,” IDC research manager Jay Chou said in a statement. “While PC shipments will be hampered in the short run by the availability of a free upgrade to Windows 10, the improved PC experience across user segments should drive longer-term demand for new PC hardware that is expected help stabilize the market in 2016 and beyond.”