The PC market has now been in decline for 12 quarters in a row, according to research firm Gartner. For Q3 2017, both Gartner and IDC found PC shipments were down globally year-over-year.

Gartner estimates that worldwide PC shipments fell 3.6 percent to 67 million units in Q3 2017. In Q3, the top six vendors were HP, Lenovo, Dell, Asus, Apple, and Acer. As you can see in the chart below, Gartner found that in the top six, only HP experienced an increase in PC shipments. Lenovo and Dell saw the smallest declines, while the rest of the market was down 11.4 percent.

Gartner noted that HP and Lenovo are neck and neck, but there’s more here than meets the eye. HP took back first place from Lenovo last quarter and, in general, is on an upward trend, with five consecutive quarter of global PC growth. Lenovo, meanwhile, is trending downward, with declining shipments in eight of the last 10 quarters.

IDC agrees with Gartner that HP was up, but found that Lenovo, Dell, and Apple were largely flat. The firm found, however, that the remaining smaller companies only saw a relatively small (3.2 percent) drop. The exact numbers, for your perusal: 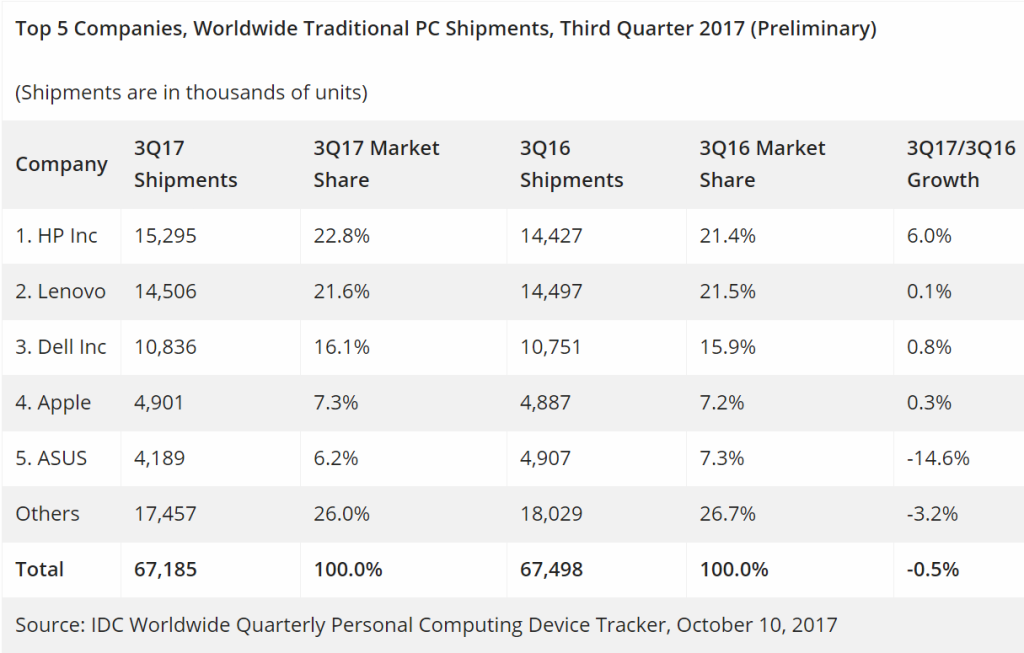 Gartner and IDC analysts have pointed to a variety of factors as contributing to this past quarter’s decline, including component shortages. The only consistent factor every quarter is that the PC simply isn’t as in-demand as it once was.

“Business PC demand, led by Windows 10 upgrades, continued to drive PC shipments across all regions, but its refresh schedule varies by region,” Gartner principal analyst Mikako Kitagawa said in a statement. “The countries with stable economies, such as the U.S., have created a positive sentiment among businesses, especially for small and mid-sized businesses (SMBs), which are more vulnerable to external events, such as economic or political. The component price hike impacted the consumer PC market, as most vendors generally pass the price hike on to consumers, rather than absorbing the cost themselves,” Kitagawa said. “We expect the DRAM shortage to continue to the end of 2018, but it will not be reflected in the final PC prices immediately.”

“The traditional PC market performed much as expected in the third quarter,” IDC program vice president Loren Loverde said in a statement. “Emerging markets rebounded slightly more than anticipated, but overall results reflect the stabilization we expected following component and inventory adjustments. The outlook for the fourth quarter remains cautious, likely with a small decline in volume for the quarter and the year. The gains in emerging regions and potential for more commercial replacements represent some upside potential, although we continue to expect incremental declines in total shipments for the next few years.”